While Google and Microsoft may be forging their own individual technology empires, the two companies share the same sentiment on stage at the AsiaD conference by saying that people should not be talking to their phones, alluding to rival Apple’s Siri feature that brings a digital personal assistant to the newly available iPhone 4S.

While voice commands and actions on a phone isn’t new–Microsoft has had Microsoft Voice Command on Windows Mobile handsets for years now and the company is relying on its acquired TellMe engine to provide speech recognition on Windows Phone 7, Google has Google Voice Actions, and Apple has relied on its own Voice Controls on iOS prior to Siri–Apple’s introduction of Siri brought forth a new paradigm for voice. Rather than merely being able to control your phone–commanding it to play a song or dial a number, for example–or dictate messages, Siri is intended to be an intelligent assistant, providing contextual reminders, helping you look up information and search the web, and retrieving relevant data based on your verbal cues. That concept is what Microsoft and Google are opposing. 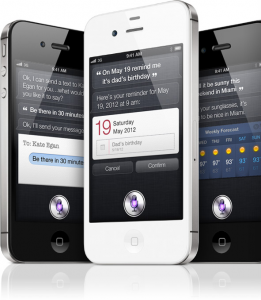 In reference to Siri, Windows Phone head Andy Lees says that the technology isn’t ‘super useful’ and that voice commands on Windows Phone, which taps into Bing, relies on ‘the full power of the internet, rather than a certain subset.’ Though Lees wasn’t optimistic about Siri, he did have harsher words for his Android rival by saying it’s too techy and not personal enough.

And then there’s Android’s head Andy Rubin who says, “I don’t believe that your phone should be an assistant.” Rubin says you should be communicating with someone at the other end of the line, and not talking to your phone. Highlighting that historically, conversations happen with other people on the other side of a phone call, Rubin’s arguments may not make sense as we enter the technological future and interfaces for devices continue to evolve. For a while, stylus was the natural UI for phones until fingers become the dominant tool since the iPhone came out, and now voice and speech will continue to grow.

Via: Engadget, All Things D