Speaking at the Goldman Sachs Technology & Internet Conference, Microsoft finance head Peter Klein told attendees that Microsoft is open on exploring Windows tablets with different sizes and form factors. This could mean that Windows 8 and Windows RT slates, like Microsoft’s own Surface Pro and Surface RT tablets, could be released with a 7-inch display size variant in the future. This would allow Microsoft and its hardware partners to compete against Apple’s iPad mini, Google’s Nexus 7, and a slew of Android tablets on the market with varying display sizes and aspect ratios.

“We’re really set up for that,” Klein said. “The notion of flexibility and scalability of the operating system is actually intrinsic to our vision and our strategy. We talk a lot about devices and services, and when we say devices and services, we mean a set of experiences that are complete, that are compelling, and they are consistent across a whole range of form factors and devices, including size of form factor.” 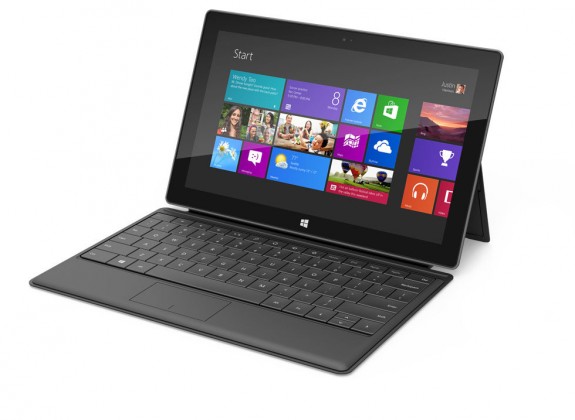 Currently, many of the tablets running Windows 8 or Windows RT come with displays with 10-inch screens or larger. Microsoft’s Surface tablets are among the more compact tablets on the market today with Windows as those slabs have a 10.6-inch screen. Samsung’s ATIV Smart PC series start at an inch larger with an 11.6-inch panel.

Geekwire reports that according to Klein, as Windows Phone 8 and Windows 8 share the same kernel, the company theoretically have devices from 4-inch on the phone side to about 27-inch on the larger all-in-one PCs.

“So I think we’re really set up to deliver the most versatile set of experiences across form factors, whether that’s 4-inch, 5-inch, 7-inch, 8-inch, 10-inch, 13-inch. And along with our partners in the ecosystem, we’ll work through that based on underlying demand.”

The challenge to releasing an even smaller form factor device that runs Windows would be both size and battery life. While the Surface with Windows RT is relatively thin, the Intel-powered Pro model has a thicker depth and is heavier as well. This makes it difficult to shrink down the screen size while trying to maintain slim proportions. Additionally, a complaint with the Surface Pro model in early reviews is that battery life is poor with the Intel chipset. Moreover, the Pro model weighs more than the RT model.

It’s unclear if Microsoft itself will release smaller tablets or if it will leave the smaller sizes to be filled by OEM partners, like HP, Dell, Lenovo, Acer, Asus, and Samsung to name a few of the top ones. Rumored second-generation Surface products suggest that Microsoft may in fact try its hand at even larger display sizes.