With the release of the preview of Windows 8.1 at Microsoft’s BUILD conference in San Francisco, California, one new feature was introduced that may help the platform become more appealing to technology geeks. Like 2D printing support, Microsoft is hoping to differentiate Windows 8.1 for use on desktops, notebooks, and touchscreen tablets by adding new drivers and API support for 3D printing.

According to the software giant, there will be a new driver model and API for new devices in an effort to bring 3D printing mainstream for consumers and developers. 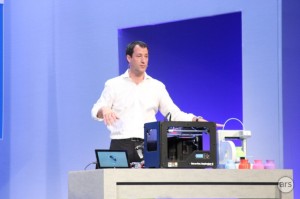 “Developers will be able to use the new API to integrate 3D printing dialog boxes into their applications, making it that much easier to print your designs,” writes Andrew Cunningham of Ars Technica.

In recent years, 3D printing technology has dropped significantly in price, making it more affordable for mainstream consumers to adopt 3D printing machines. Whereas in the past, 3D printers cost thousands of dollars, there are now smaller, inexpensive printers that sell for a few hundred dollars. One cool consumer application with 3D printing is to create your own smartphone case.

With Windows 8.1, a number of new features were added by the tech giant, and 3D printer is one of those features. Microsoft had hoped to appease geeks by addressing some of the concerns of the Windows 8 release and spur adoption of the Windows 8 platform.