Microsoft’s cloud service is finally available on Android with the release of the official SkyDrive app for Android.

Unfortunately, while SkyDrive lets users views their Word, Excel, and Powerpoint documents, the app won’t edit those files. Users can, however, open those documents in other apps if they wish to edit them on their devices. That’s no substitute for Office for Android, but it’s as close as we have at the moment. 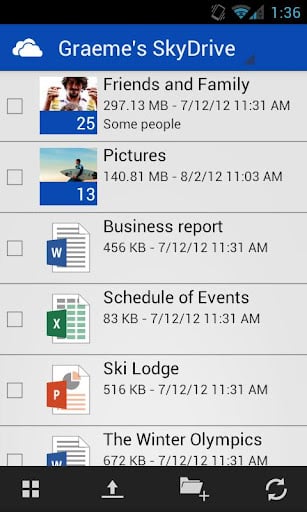 The SkyDrive app also lets users share documents via email or other apps easily. The app creates a link to the files in the cloud and users can send that link to anybody.

Microsoft’s app doesn’t offer too many features over other apps like Dropbox, except that it integrates well with the upcoming Windows 8. That integration will make the SkyDrive app very useful for users who upgrade to Windows 8 and the new Microsoft Office 2013 which automatically saves documents to the service.

SkyDrive does look nicer than a lot of other cloud storage apps. Microsoft’s Windows 8-style design meshes well with the Holo theme of Android 4.0 and above.