According to a number of sites like The Verge and TechCrunch, we now have some info on the pricing of Microsoft’s Surface RT Tablets. Microsoft has scheduled the big roll out for October 26 in its pop-up stores and from its online stores, alongside the official launch of Windows 8. Keep in mind these are the RT versions of Microsoft’s Tablets and not the “Pro” versions which are scheduled to come later. Probably after the first of the year in my estimation. Note also that the links we were seeing earlier have now gone off line and earlier graphics laying out the price points have been removed from The Verge. 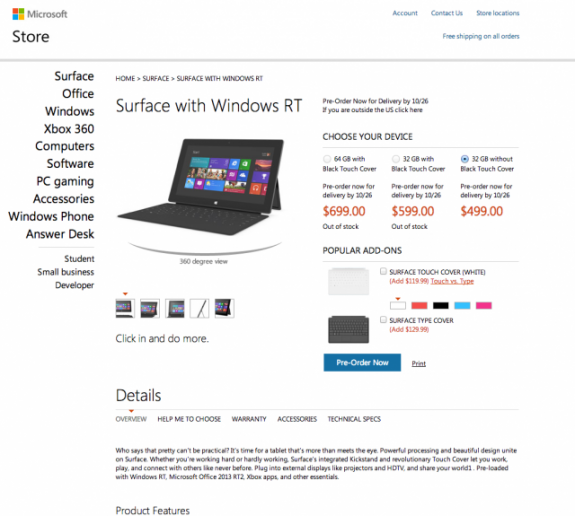 These prices come in comparable to similar capacity iPads, so it looks like Microsoft’s pricing move is about where most suspected this would be. This looks to be a pre-order page with delivery promised on 10/26. And indeed, if that is the case, Microsoft will have to re-publish the links pretty soon.

As the links to the online store listing the prices have been removed, this info may have gotten out the door before Microsoft was ready to make it available. So, we’ll update as we hear more. (see this post for the official announcement.)

This comes on the heels of Microsoft releasing its first Surface RT commercial on national TV last night. That commercial features all sorts of dancing folks clicking those keyboards to the Tablets.

I’m guessing Microsoft wants you to think that its Tablet needs one of those keyboards.