I’m going to go a bit into rant mode here, so be warned. Yesterday, Walt Mossberg highlighted an initiative by Microsoft. The gist of this initiative is simple. If you buy a new Windows PC and want all of the CRAPWARE that might be included on it removed, Microsoft will do that for you for a $99 fee. The $99 fee turns your CRAPWARE infested PC into what Microsoft is now calling a Signature PC. Or, you can just order a Signature PC and pay extra for a computer that works the way it was designed to work out of the box.

Where to start. First, this Signature PC initiative shows Microsoft acknowledging something that anyone running a Windows PC knows. The CRAPWARE that comes installed on PCs can bog down a system. Microsoft itself knows this is the case and has been selling CRAPWARE free PCs for some time now. I’m sure there are some users who don’t mind this, but I can’t think of another industry that delivers products that are intentionally crippled by installing what are essentially ads on a system. I find it condescending and beyond ludicrous that you have to pay a fee to essentially get the product to work the way it was designed to work. Yeah, I’m crazy right. 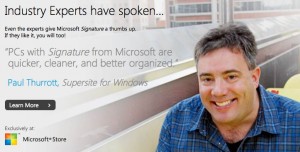 And there’s the second point. The OEMs that cripple machines with CRAPWARE know exactly what they are doing. Throwing all of these icons on a desktop makes a new machine on first boot look like the lawns in front of polling places at local precincts, scattered with signs.  In the best case they just clutter up the desktop, making the Out of Box Experience (OOBE) akin to sitting through advertisements for TV shows at as movie theatre before the trailers. In the worse cases, some of these CRAPWARE applets pop up on every boot until the user disables them. That process is often more tedious than it needs to be. Quite honestly, I find the entire scenario to be one that completely and cynically devalues the user and the product. I’m sure somewhere along the line someone thought this was a value add for the customer. But we’ve long since passed that point.

Here’s why I think you’re a sucker (in the P.T. Barnum way of thinking) if you fall for this. By charging to remove CRAPWARE that Microsoft allows to be installed on the machine in the first place, Microsoft is sending a signal that this is the smart way to make sure you have a nice clean PC. It’s a subtle form of up selling. Nothing wrong with an up sell. But when the up sell essentially says that this PC you want is crippled and a piece of mammal dung, well, gee, that’s an attractive way to build customer satisfaction. Sadly, if this turns into enough of a profit center I also fear it will just lead to more CRAPWARE and not less. (It makes me wonder how this will pay out with the UI changes for Windows 8). The fact that a customer has to pay extra to have a PC that works out of the box the way it was designed to work is nothing short of a cynical, blighted mentality, that proves, at least to me, that the folks making these devices don’t care about users, instead focusing only on units sold.

If you want to take advantage of this program there are two ways to feed your $99 to Microsoft. If you live by one of the new Microsoft stores you can come in, pay the CRAPWARE tax, and they will clean things up for you. If you don’t live close to a store, (there are only 16 currently) you can shop for this service and Signature PCs online at Microsoft.

And this brings up the last point of my rant. Go take a look at that Signature PC page. Great promises of faster and better performance. By offering this Signature PC approach, Microsoft is saying that every non-Signature PC that is sold with Windows is the equivalent of buying a discounted piece of crap. I’m not trying to offend anyone here by saying this, but the distinction to me means that Microsoft is essentially saying why not buy your PC at your local CVS or Walgreens. “Industry Experts” who say this is a good idea are essentially supporting both Microsoft’s continued decline, as well as a practice that should be condemned.