The closed up restrictive Microsoft disappeared in recent years. It has been replaced by a new, open company that develops apps for iOS and Android, often faster than it does for its own Windows phone operating systems. The Microsoft Universal Mobile Keyboard is a great example of this. It comes with a three-position switch that lets the typist connect to up to three devices, including all three major platforms: Windows, iOS and Android.

But how well does it work with all three? 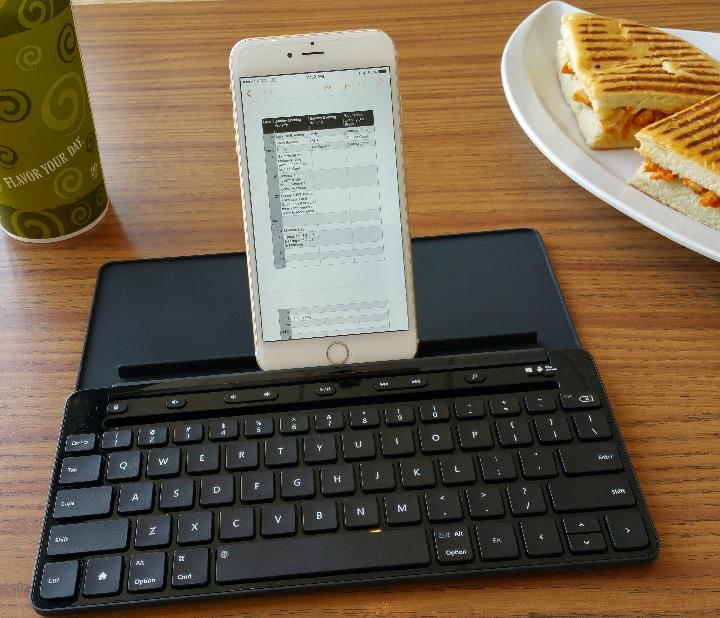 The Microsoft Universal Mobile Keyboard ($79.95) takes up very little space thanks to the dimensions. It’s 9.53-inches wide, 4.29-inch deep and only .47-inches thick when closed. Despite the size, we get a keyboard that’s comfortable to type on, even for a touch typists with beefy paws like me. A row of shortcut buttons between the keyboard and the back edge (where the user places their phone or tablet) controls media and volume levels, as well as locking the screen and giving a shortcut for searching. 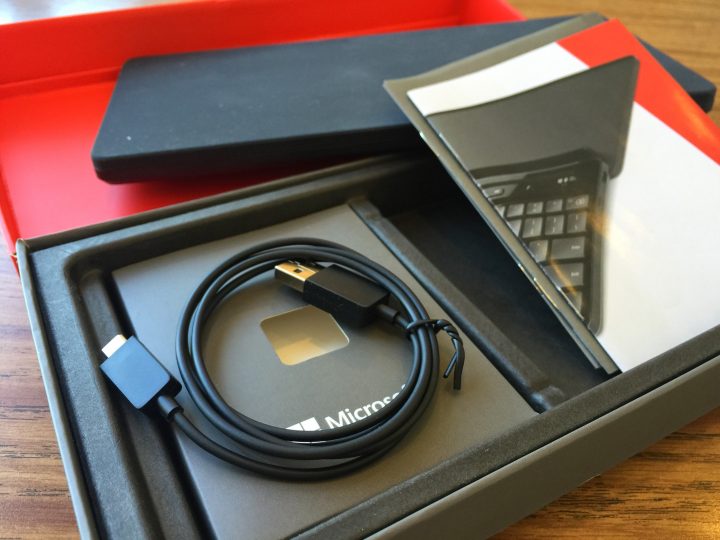 The keyboard is black plastic with finely textured keys. A removable cover folds over to protect the keyboard. It’s made with a rubberized coating that feels soft, but also collects dust and lint. I carry it around in my car so it’s always available. The outside started looking dirty after just minutes in my car’s console between the front seats. I cleaned it off and within minutes sitting on a restaurant table it looked like I had rolled it in bread crumbs. The debris doesn’t come off easily.

The Microsoft Universal Mobile Keyboard holds up well thanks to a quality design. It’s not a rugged device for extreme environments, but the user doesn’t need to baby it either. 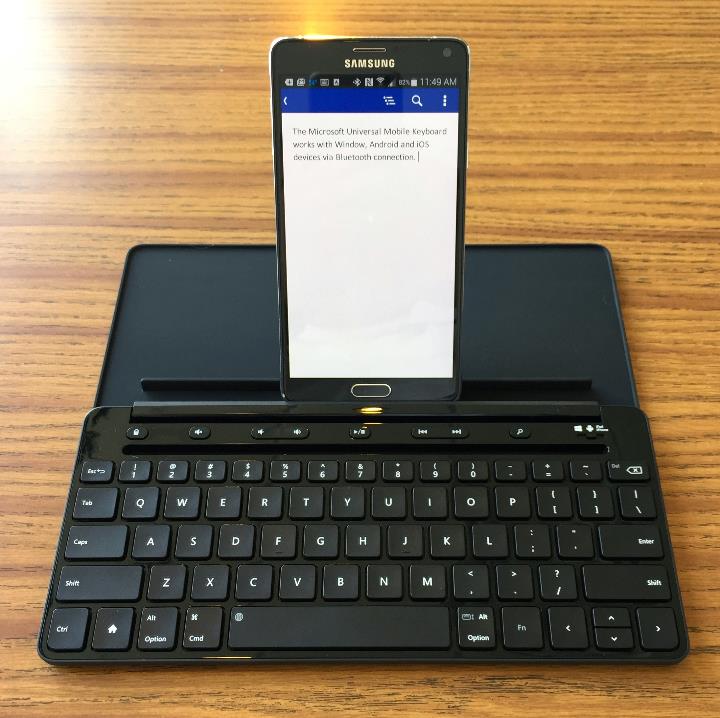 On the right edge near the back of the keyboard sits the power/Bluetooth pairing button and the micro-USB port used to charge the battery in the keyboard.

The battery came charged up. After about three weeks of use, I’ve still never charged it once. It’s still going strong. 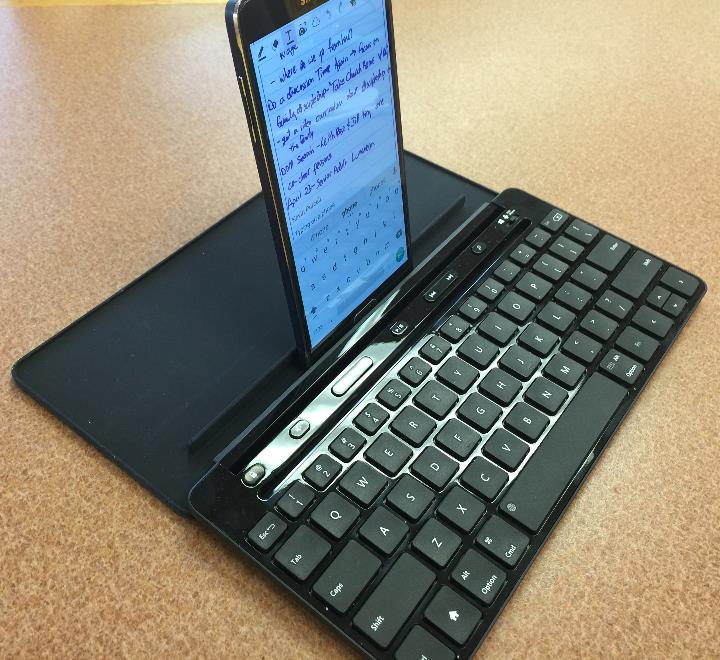 Open the cover on the keyboard and slide the tablet or phone into the channel designed to hold the device. The tablet rests at one of two angles. One is closer to an upright angle while the other sits back close to a lower 45-degree angle.

People who want to connect the keyboard up to a tablet or device that won’t fit in the channel, like the Surface Pro 3, can remove the cover easily so they can position the keyboard close to their tablet. The cover connects to the keyboard with a strong magnet. It doesn’t come off unless the user pulls at the cover with a little force. 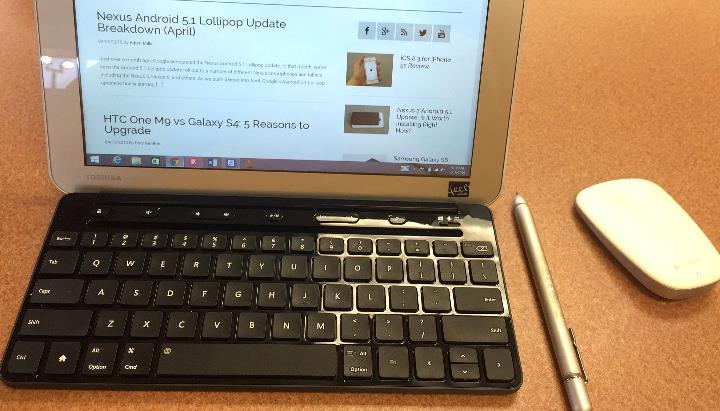 On the bottom there are two non-skid, raised rubber lines that keep the keyboard in place. It won’t slide around while using it. 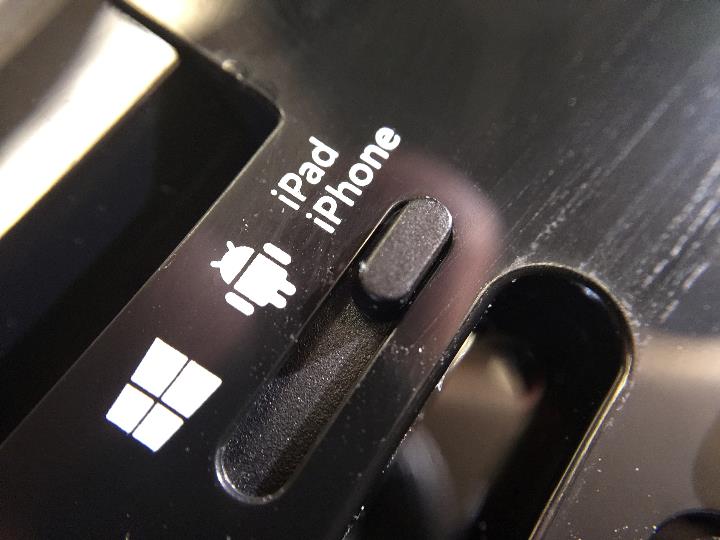 In the upper right corner of the Microsoft Universal Mobile Keyboard there’s a three-position switch with icons for Windows and Android in positions 1 and 2. The 3rd position reads iPad iPhone.

The keyboard paired easily with all the devices I use including…

All of the shortcut keys above the number keys work with each device. The Home button takes the user to the home screen on both Android and iOS. On Windows it opens the Start Screen. The search icon brings up the search function in Charms on Windows 8.1 and Spotlight search on iPad or iPhone. On Android it launches Google Now search. A lock key on the left turns off the screen on all of the devices. 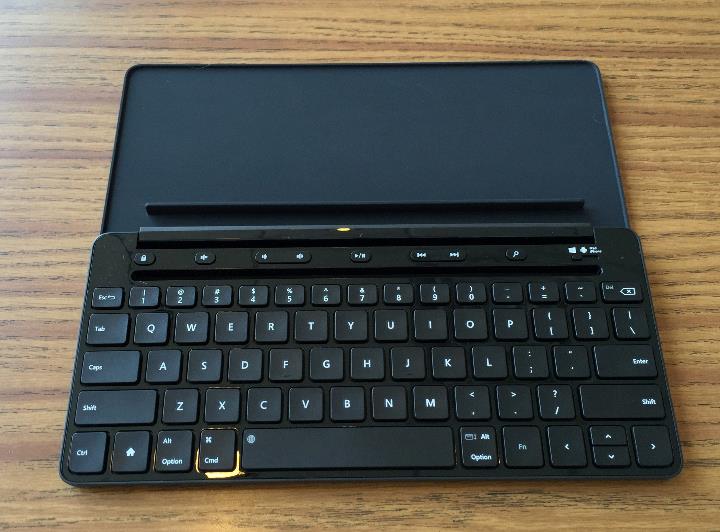 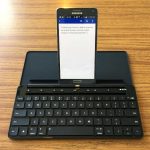 Compare it to the [amazon_link id=”B00MUTWLW4″ target=”_blank” ]Logitech Bluetooth Multi-Device Keyboard K480(920-006342)[/amazon_link] for a lot less, but it’s not nearly as mobile. It’s larger and doesn’t come with the handy cover.

I prefer the Microsoft Universal Mobile Keyboard because of the great design, comfortable typing experience and long battery life. That’s in addition to it’s compatibility with so many devices. It’s my go-to mobile keyboard and makes me more productive while out and about with my tablets or phones. Microsoft made an awesome mobile Bluetooth keyboard that works well with the three major platforms.