After having been available on the iPad, Microsoft’s OneNote note-taking application, which is a popular choice among Tablet PC owners, is now available for users of the Android platform. Available for smartphones and tablets, OneNote allows Android users to synchronize their notes with the desktop Windows software, if they are an existing users, and there is even SkyDrive cloud-storage integration as well. 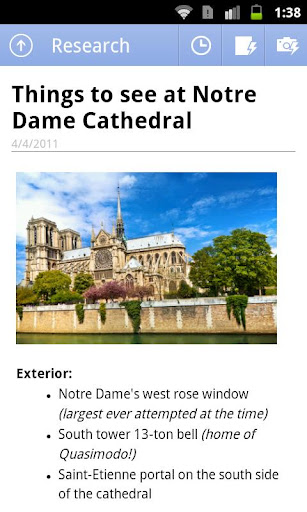 According to the app’s description, users can “Create notes with text, pictures, and bullets. Make and manage to-do lists with checkboxes. Then keep your notes in sync using free Microsoft SkyDrive® online storage to access, edit and manage them from virtually anywhere, from your PC or almost any web browser.”

The app is available as a ‘fermium’ application where users can test drive the app for free. Users can store, edit, and access up to 500 notes. If users want more, then they’ll have to pay utilizing the in-app purchase feature to unlock unlimited note storage capabilities.

In addition to OneNote, there are other note-taking and storage solutions on the market for both Android, iOS, and other mobile platforms including the popular EverNote.

Users can download the app right now through Android Market.

The problem, though, with OneNote on platforms other than Windows tablets, is that the app lacks native inking and handwriting recognition capabilities. On Windows slates and convertible tablets, OneNote will allow users to jot and maintain typed and handwritten notes as well as convert handwriting to typed text on the go. The ability to do that will allow users to capture notes more naturally, like with a traditional pen and paper, but the app can recognize handwriting as well allowing the program the ability to search through copious amounts of notes to find what was written and stored, much like with typed text.