Over the past few years the game has grown increasingly more popular. Updates arrive often, but the mobile version still isn’t running v1.0 of the latest software. Now, nearly five years later it’s finally coming. The company has a lot planned to, and released a teaser video for excited fans.

For most, the open-world creation game doesn’t have an actual ending. We can just build and build forever. However, that’s finally about to change. We can also expect more music, a soundtrack and other things. Take a peek at the video below.

On December 1st Mojang released the video above along with an official announcement on the blog. It’s our first look at teaser at the new end boss, among other things. Their game went from being tossed together for mobile in just three months, into a world-wide phenomenon. Now seeing nearly 40 million players across Android, iOS, and Windows 10. And that’s just for Pocket Edition.

While the PC version of the game received an ending back in 2012, Pocket Edition never did. It took far longer than many expected and here’s what we know.

According to Mojang, the 1.0 update for Pocket Edition will be called the “Ender Update”. Which is of course because of the new Ender Dragon, the final boss. Beat him, and you’ve officially beat the game. 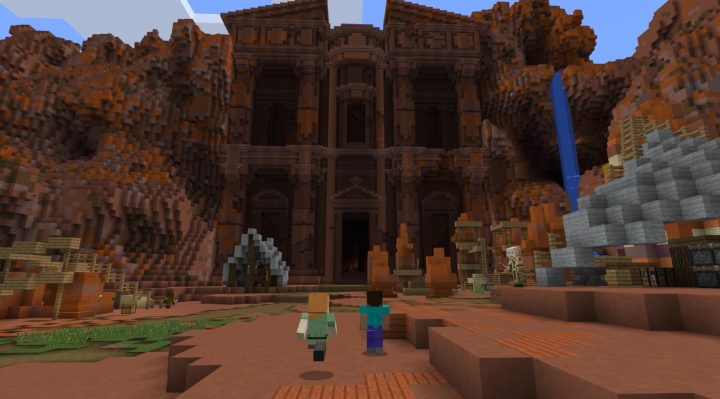 Additionally this update will add a lot of other effects and changes. While they aren’t sharing everything just yet, here are a few of the exciting changes you can expect to see in Minecraft Pocket Edition 1.o when it arrives.

The Seed Library will make it easier to use portals and see alternate dimensions and other realms. Not to mention new characters in the game like the Polar Boar and its cubs.

However, many fans of the original title will be happy about the music. Pocket Edition 1.0 will have the games original soundtrack. To make things even better, it will be available via a separate download from the game. Meaning the music won’t use data and other things.

Last but not least, Oculus Touch support. Yes, Windows 10 players will soon have the option to enjoy Minecraft in full VR with the most advanced controls yet.

So that all sounds exciting, but when will it be released? Sadly Mojang didn’t share an exact release date yet, but we have a good idea of when to expect it. Typically the developers release game updates within a few weeks of making any major announcements.

Following past timelines, it should arrive before the end of the year. Potentially right in time for Christmas. Now if we could just get cloud-based game progress saves everything would be perfect. It’s also worth stating that rumors suggest this update will increase block building height from 128 blocks to 256. So get ready to create wonderful things.

In closing, Mojang and Microsoft state that this is the Ender update, but not the end of Minecraft Pocket Edition. They have a lot more planned for the future, and are looking forward to seeing a 10th anniversary too. We’ll update once we know more, or when the update officially goes live.