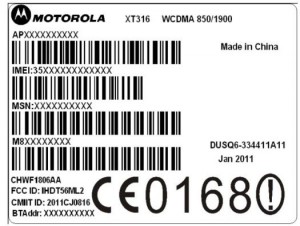 According to recently filed FCC documents, the Motorola XT316 is making a visit at the U.S. regulatory agency for approval with AT&T-compatible 3G bands. The handset is said to be a slightly smaller edition of the Motorola Pro, Motorola Droid Pro, or the Sprint Motorola XPRT–all of which are based on the same chassis design–with a smaller 2.8-inch display rather than the 3.1-inch of the Droid Pro handset.

The handset previously also made its way over to the FCC a few months ago, but at that time it was requesting for approval with Chinese 3G bands. It looks like proper AT&T GSM bands are now in tow, but it’s unclear if the handset will actually launch in the U.S. much less be available subsidized through AT&T; FCC approval does not guarantee that a handset will in fact launch.

As there still aren’t many BlackBerry-styled Android handsets to compete in the keyboarded space sans sliding mechanism, this miniature Droid Pro handset will be welcomed for those who prefer a front-facing QWERTY form factor. The handset will most likely compete with the HTC Status in the same space on AT&T, though the Status is more geared at the Facebook audience.