Mobile Tech Pitches In To Provide Actors Their Pitch at UPTA 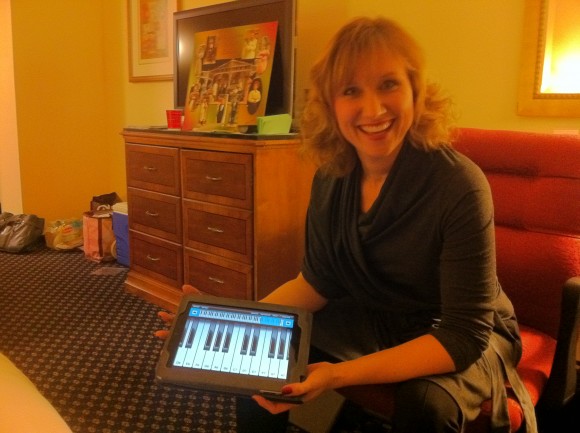 I’ve been absent from these pages for the last week or so as I’ve been auditioning in Washington DC and now wrapping up auditions at the Unified Professional Theatre Auditions (UPTA) conference in Memphis, Tennessee. At this conference we see over 800 actors in a period of 4 days. Most of those 4 days are spent in what is called general auditions where many theatre reps sit and watch actors do ninety second cuts of songs and monologues. From those 90 seconds, the theatre reps then give the actors they are interested in a call back. These typically take place in small hotel rooms, which make for some unusual situations to say the least. It’s a grueling process that sometimes goes very late into the night with actors singing at full volume in a hotel room at 1 in the morning.

At the general and in some callbacks an accompanist is provided for those actors who sing. But for theatres with smaller budgets (like mine) we ask the actors to sing a capella. This year has been the year of digital accompaniment and pitch finding. At least 9 actors have come in with either an iPad, an iPhone, or an Android Phone with an app that provides a keyboard for them to find their pitch. Two have come in with iPhones with the accompaniment for their numbers ready to be played back as they sing. This may not sound like much but given how stressful the situation can be, any thing that can help the actor make a good showing is a huge plus and works out well for all sides.

I’m guessing this trend is going to continue as more and more Tablets get in more and more hands, as well as smart phones. I have to say, for this geek who is also a theatre geek, it makes me very interested in the actor who comes in ready to roll with some gadgetry. These call back interviews are as much about getting to know each other as they are about showing off how well one sings or acts, and talking about gadgets is a great ice breaker.

Thanks to actresses Katy Wolfe Zahn for posing for the picture during her interview.