With the iPad taking over businesses large and small–American Airlines is equipping its pilots with Apple’s tablets and Nordstrom department stores have replaced bulky cash registers in favor of iPads for point-of-sales terminals–it’s hard to imagine a world without consumer-grade tablets. However, if you’re running a business, especially a mobile business where employees are frequently in the field, the iPad and other consumer-based Android slates may not be the right tablet for your enterprise.

READ: MobileDemand Talks Tablets: What’s Out There and TCO

A recent case study published by MobileDemand states that consumer tablets often have a higher total cost of ownership, or TCO, than ruggedized tablets that are built for enterprise.

While rugged devices are sometimes a bit more costly to acquire and deploy–these are what MobileDemand calls the hard cost of ownership–they will last longer. When calculating in the soft-cost, which includes training, maintenance, and any downtime, the soft costs for non-rugged devices will be much higher.

As most consumer tablets aren’t built to rugged standards, like an IP-65 rating, they may fail in the field. Built-in batteries of the iPad may mean that the tablet may not last through a full day on heavy use, and extreme conditions and owner mis-handling of the tablet may render the device to shut off if it overheats or break and crack if it hits the pavement when used in the field. 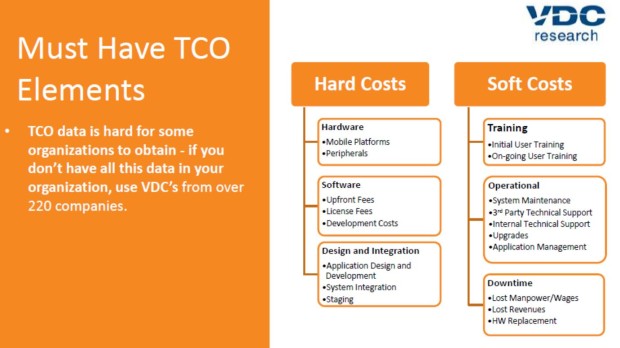 These issues create the soft cost of ownership. With non-rugged, consumer devices failing more, in harsh conditions, you’ll have devices that will need to be taken out of operation, resulting in down time, which could lead to loss in productivity, missed revenue opportunities, and lost manpower. Even if a tablet doesn’t fail, break, or crash, if you cannot swap out the battery–as in the case of Apple’s iPad or Google’s Nexus 7 slates–enterprises are realizing that field workers will not even use the tablet and will resort to old fashioned pen and paper methods for collecting data or processing sales. 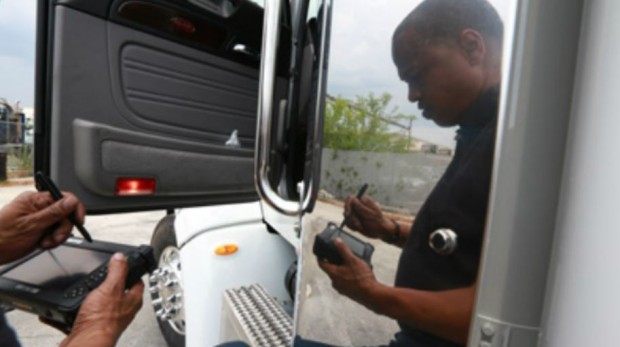 Not only does going backwards require more time, but it also requires more back-end work, incurring further “soft costs” along the way.

Simply put, consumer-grade, non-rugged devices fail more in the field than rugged devices, by a factor of about 3 to 1. 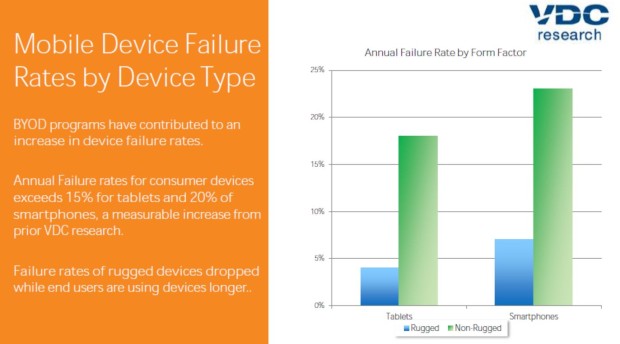 There are other factors to also consider as well. For one, many consumer tablets today rely on ARM Holdings’ processor designs, which may lack the robust digital signal processing required for applications today or in the future. On the other hand, enterprise-grade tablets rely on Intel’s more powerful Core i5 processor or more energy efficient Atom CPU, which can deliver a more robust experience.

For example, these more powerful chipsets allow Windows tablets to run the full version of Windows, and not just Windows RT. Running Windows will allow users to have access to legacy programs and build more compatibility into their workflow.

“Our TCO analysis has shown that Windows 8 on Intel tablets can provide a cost effective platform and benefits to IT organizations and enterprises that can be passed along to end users along with a new user experience that includes true content creation capabilities,” Gartner research says.

Windows 8 on Intel could deliver TCO savings of up to 25 percent when compared to cheaper ARM tablets, according to Gartner.

Also, the powerful chips will allow more robust uses of sensors and cameras, which can be used in one instance to create 3D images. With the camera, software can be added to allow detection of depth and add illumination, which will allow the tablet to create a 3D model. In enterprise use, this could help automate the process in identifying products and also to get a measurement on packaging size and volume.

For 91 percent of participants surveyed, TCO is considered or a point of discussion when considering a mobile device deployment.

In choosing a tablet, the firm recommends that now only should businesses consider the OS and the features that the operating system brings (security, multitasking), but also the environment in which the tablet will be used. Will the tablet be used in the field under harsh sunlight? Will it be put under extreme temperature conditions? How likely will it be dropped? Will users operate the slates with wet hands or gloved fingers?

These considerations were taken into account by Great State Beverages, a liquor and soda distributor in the northeast. Sales people for GSB were not only subjected to the harsh New England environment, but they’re also interfacing with extreme temperature shifts going in and out of coolers and refrigerators.

This was a problem, and the non-rugged HP tablets that were deployed by GSB manager of information system Stacy Morin did not hold up.

“They did not fare well in the environment,” noted Morin, who also said that 4 out of 5 of the slates deployed suffered from damages, including cracked screens.

Switching to a rugged tablet, Morin says that the IT department has no complaints.

“The only maintenance that I had to do on these units was purely software,” Morin boasts. “They just plain work.”

This is a huge for the GSB business as when these slates do not work, salespeople aren’t able to log sales, and without sales being logged, beverages cannot be shipped and distributed. Any hiccups along the process would cost GSB money. Customers may lose satisfaction, revenues could be lost with downtime, and not only will employees be less productive but they may quit and look for work elsewhere if they get frustrated by the technology.

READ: The Right Productivity Tool for the Job

And while a consumer device may seem cheaper than a rugged device, enterprise users may want to avoid the cheaper alternatives even if these choices are “free.” According to MobileDemand, rugged devices are cost effective, even in the first year of deployment, and their benefits stretch to the third and fifth year. On the other hand, when you’re choosing a consumer device, you will be racking on higher “soft costs” later down the road, costs that account for 89 percent of TCO. 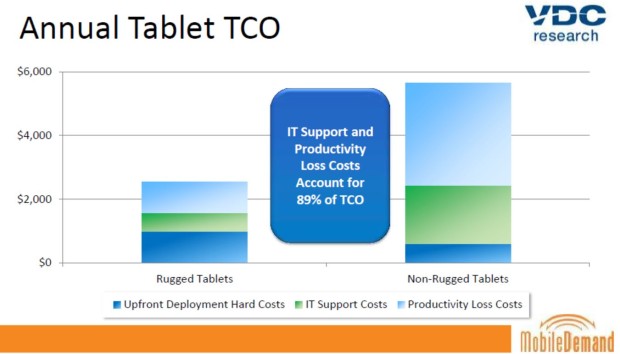 To figure out the total cost of ownership when selecting a rugged device for your business and your relative savings, you can use MobileDemand‘s TCO calculator tool.