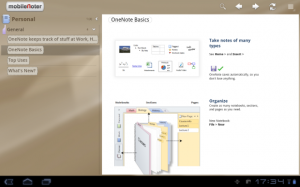 I’ve had an on again off again affair with MobileNoter. MobileNoter is an App and service that allows you to do a two way sync using your mobile device and your OneNote files. I’ve used it primarily on the iOS platform.

Now there is a version available for Android Honeycomb Tablets called MobileNoter SE HD. Like its predecessor(s), the App allows you to sync your notes back and forth and you can hook into this syncing via Dropbox or Windows Live Skydrive. MobileNoter has been available for Android but this is the first edition designed to take advantage of the larger  screen real estate of a Tablet.

Not only is this a viewer but you can do some editing of your notes on your Tablet. OneNote users with Honeycomb Tablets should give this a try. I haven’t done so yet, but plan on doing so later this evening.

Also of note from the same developers is an App called Ever2One converter that allows you to convert your Evernote files to OneNote format. If you’re a die hard OneNote user this obviously could be of use. But in my usage I find that Evernote handles what I need without converting those files over.