Despite repeatedly insisting that Android is the only Google operating system that is meant for tablets, Google may be looking at introducing a Chrome OS-based tablet in the future. The company has recently made efforts to try to bridge the two form factors–tablets and the notebook form factor that Chrome is intended for. With the Chromebook Pixel, Google had introduced a touchscreen to the high-resolution display, a first for a Chromebook and with limited functionality at this point. 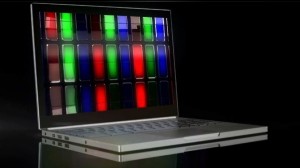 However, the line will soon blur even more. Google had introduced a new feature with its latest developer build of Chrome OS allowing for screen rotation. Screen rotation is typically more useful in tablets where users can hold the device in portrait or landscape orientation, but on a notebook with a fixed screen, the feature isn’t really needed.

And according to Kevin Tofel of GigaOm, the developer notes say that you should be able to “rotate the screen on all Chromebooks.”

Even if Google isn’t planning a standalone tablet to compete in the same space as its Android OS, the company could be exploring new capabilities and new form factors for Chrome OS, such as hybrid or convertible models with detachable displays or screens that twist, flip, or rotate like what we’ve been seeing on some recent Windows models.

And Google may not be the only one backpedaling on its earlier words. Microsoft is rumored to be introducing or reintroducing new features to its Windows platform later this year in a software update called Windows Blue. The update may bring back the Start button that was removed on Windows 7, may allow Windows OEM to create tablets with 7- or 8-inch displays, and may even begin to unify the Windows and Windows Phone platforms. The software could introduce larger Windows Phone and smaller tablets, blurring where the mini tablet and large phablet lines begin and end.