The new Moto X smartphone from Motorola, which was seemingly confirmed for a number of carriers in the United States, has seen its fourth carrier rumored today as an FCC filing seems to point to an arrival on U.S. Cellular in addition to AT&T, Sprint and Verizon Wireless.

When the Moto X was first announced several weeks ago, Motorola boldly proclaimed that unlike previous Motorola phones, which found themselves as exclusives on American carriers, the Moto X would arrive on a number of different carriers, giving consumers the same amount of choice afforded to iPhone 5 and Galaxy S4 buyers.

The Moto X is appearently headed to a wide swath of U.S. carriers.

Of course, the company remained mum on exactly where the Moto X would be heading when it touches down later this year but thanks to several leaks, we have a very good idea.

The Moto X has been no stranger to the FCC. In fact, several different variants have emerged in recent weeks with the XT1058 thought to be the AT&T Moto X, the XT1056 thought to be the Sprint Moto X and the XT1060 thought to be the Verizon Moto X. Now, it appears that those models will be joined by a Moto X for regional LTE carrier U.S. Cellular. 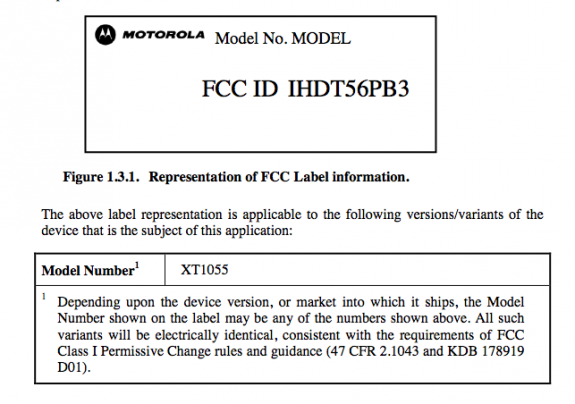 This is a Motorola phone and likely the U.S. Cellular Moto X.

An FCC filing, discovered by Blog of Mobile, points to a device called the XT1055 that is believed to be the U.S. Cellular Moto X. If true, and it likely is, it means that the Moto X is coming to at least four carriers in the United States with the only major carrier left out, at least for the moment, being T-Mobile. It’s not clear if T-Mobile will join the party but given its LTE capabilities and its unique off-contract, data plan structure, it would be strange to see Motorola leave the Moto X off the Magenta carrier.

As for Moto X features, the device was recently rumored to have a dual-core Snapdragon S4 Pro processor, 2 GB RAM, 16 GB of storage, a 10-megapixel rear-facing camera, 2-megapixel front-facing camera, and Android 4.2.2 Jelly Bean on board.

We also heard, from Motorola itself, that the device would have powerful, smart software, unique to the Moto X.