The new Moto X sign up page claims that the anticipated device will be “coming soon” though it does not go beyond that leaving interested consumers wondering when the Moto X launch might occur.

Earlier this year, Motorola announced a brand new smartphone dubbed the Moto X that the company said it would assemble in the United States and release sometime in late summer. And while it mentioned some of the details, smart software in particular, many of the details surrounding the Moto X remain unclear.

Read: Moto X: “The First Smartphone You Can Design Yourself”. 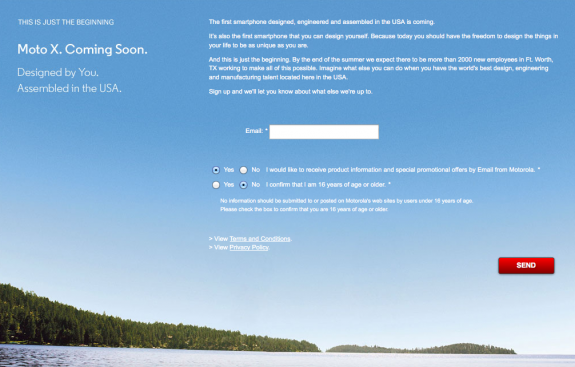 A Moto X sign up page is now live, claiming the device will be “coming soon.”

In an effort to drum up some excitement around the still mysterious device, Motorola took out full page ads in several publications today, promoting the device ahead of the July 4th holiday. In addition to that advertisement, which confirmed leaks that suggested that the device would be customizable, the company released a sign up page for those looking to garner more information about the Moto X.

The sign up page stylistically is similar to the advertisement and uses the same rhetoric. Motorola wants consumes to know that this is a smartphone being assembled in the United States and they want consumers to know that there will be a lot of choice when it comes to the design of the Moto X. The company claims it will be the “first smartphone that you can design yourself.”

This sign up page also claims that the Moto X will be coming soon, though it’s unclear if that is in reference to the device’s launch or its release. While we’ve heard that it will be out sometime in late summer, something that points to September, it’s possible that Motorola will launch the Moto X well before that.

This is thought to resemble the Moto X.

In fact, we already have a fairly good gauge on the Moto X. We now know that it will be customizable in some way and leaks point to the device as having a dual-core Snapdragon S4 Pro processor, 2 GB RAM, 16 GB of storage, a 10-megapixel rear-facing camera, 2-megapixel front-facing camera, and Android 4.2.2 Jelly Bean.

It has also become clear that this phone is not a DROID branded smartphone and that it will be coming to a number of carriers including AT&T, Sprint, U.S. Cellular and Verizon.

Just when it might touch down remains uncertain but for those interested, there is now a way to stay officially informed.