While Motorola and Google are still tight-lipped about the specifics of their upcoming Moto X smartphone, a new advertisement for the device proclaims that it will be the “first smartphone you can design yourself” a statement that seems to back rumors that have suggested that users will be able to customize certain parts of the device.

Earlier this year, Motorola announced a new smartphone for 2013, a device that it’s calling the Moto X. The device, while official, still is a big question mark as Motorola has only filled in some of the details in the build up to its eventual launch. What we know so far is that the device will likely have some unique, smart and powerful software on board. We also know that the specifications likely won’t be high-end and will instead be a little less than what we’ve seen so far from 2013 flagships. We also know that it will be assembled in the United States, something that Motorola and Google are proud of and are hyping up in a new ad for the still unreleased phone.

Read: Is This the Sprint Moto X?. 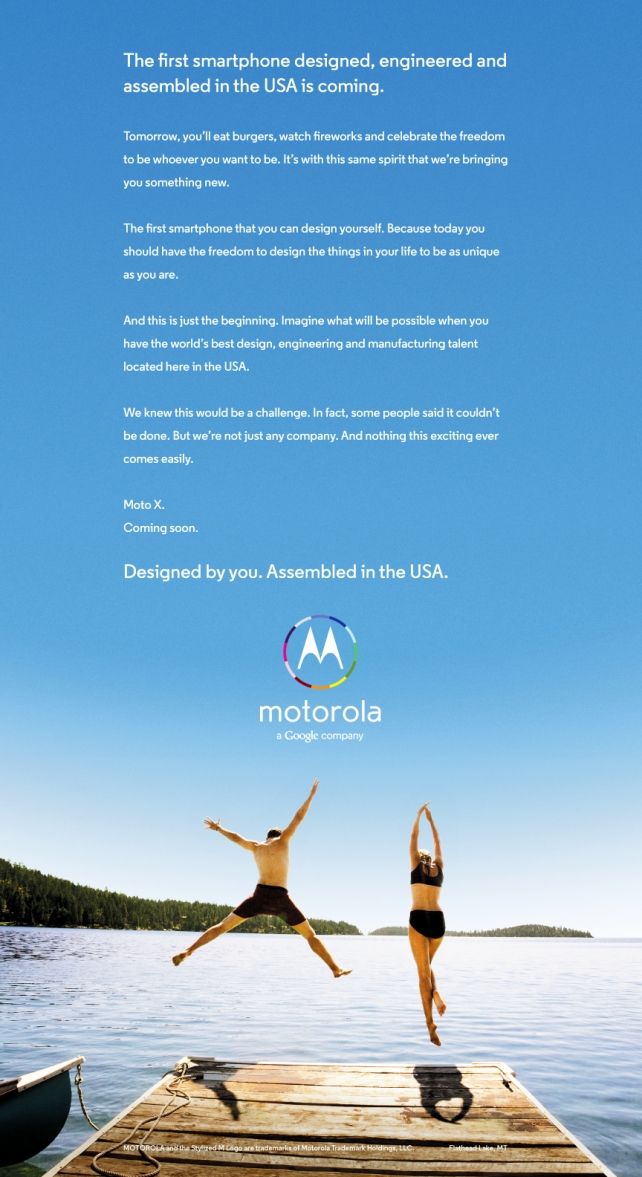 This is the first ad for the Moto X.

Motorola, according to AdAge, will be releasing its first ad for the Moto X in publications starting tomorrow, just ahead of the July 4th holiday. The advertisement will be found in tomorrow’s The New York Times, USA Today, Wall Street Journal and Washington Post. The ad attempts to tie the smartphone into Independence Day, exclaiming that the device will not only be assembled in the USA but that it represents a freedom of choice.

This is thought to resemble the Moto X.

Beyond those, it’s not clear what Motorola might have up its sleeve though it appears to tie heavily into the device. Motorola even goes as far as to say that the phone is “Designed by You, Assembled in the USA” a slogan that will likely pop up more and more as time goes on.

The Moto X is expected to make its debut this summer though Motorola and Google have not announced a specific release date as of yet. However, thanks to the ad campaign, we know that things are definitely in motion and we should see something emerge soon.

Motorola’s new device is expected to land on AT&T, Sprint, U.S. Cellular and Verizon, at least, a change from past Motorola devices that were often exclusives.