The Moto X, Motorola’s brand new smartphone that isn’t called Droid Ultra, Droid MAXX or Droid Mini, is set to finally be revealed on August 1st as Motorola has sent out invites for an event set to take place that day in New York City.

Motorola’s Moto X has been official for quite some time, Motorola has refused to disclose the goods to consumers, instead choosing to issue a tease confirming rumors of user customization but not much more. The device though appears set for a reveal in August as the company has sent out invites to an event set to take place on August 1st.

Read: 3 Important Things to Consider Before You Bling Up Your Moto X. 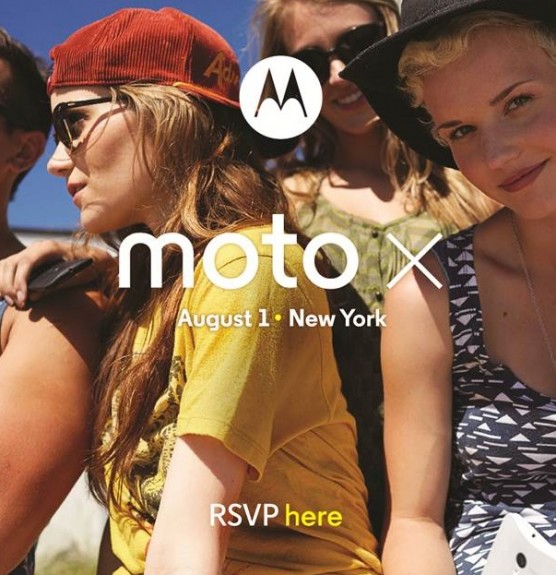 The Moto X will be launched on August 1st.

While some event invitations don’t disclose what will be announced, case in point Verizon’s media event on July 23rd, Motorola is not beating around the bush in its latest invite as Moto X is splashed on the invite. We also get a glimpse at the device itself which appears in both black and white and matches up with the leaks that we’ve seen emerge in recent weeks.

Prominent are the plastic design and the camera that resides in the center of the device’s form factor. Unfortunately, the invite does not reveal any of the rumored casings that users are said to be able to choose from, casings that are thought to include both a wide range of colors and materials including wood.

Motorola says that the Moto X is the first smartphone that users can design themselves.

As for the rest of the device, it’s expected to have a large 720p display, dual-core processor, a high quality 10MP camera that may be able to keep motion blur to a minimum, unique software and of course, a release on a number of carriers in the United States including AT&T, Sprint, T-Mobile, and Verizon Wireless. Release date rumors have indicated that the device is going to be heading to shelves sometime in late August.

The Moto X will be the company’s fourth smartphone announcement in the third quarter as it’s expected to be joined by the Droid Mini, Droid Ultra and Droid MAXX, all of which are expected to touch down on July 23rd at Verizon’s launch event in New York City.