The Moto X, Motorola’s very official but still mysterious smartphone, appears to have leaked out in full view ahead of its arrival with the photo offering a glimpse at the device’s back side complete with Motorola logo, black matte finish and a camera front and center.

For weeks, the Moto X has been official and Motorola has even launched an advertising campaign to promote the device which is being touted as a device assembled in the United States and the “first smartphone designed by you.” And while the device may be official, many of its details, including the device itself, remain entrenched in the shadows.

The Moto X is thought to be coming out sometime later this year.

Rumors suggest that the device will be coming with a large display, dual-core Snapdragon S4 Pro processor, 2 GB RAM, 16 GB of storage, a 10-megapixel rear-facing camera, 2-megapixel front-facing camera, and Android 4.2.2 Jelly Bean. It’s also rumored to be coming to AT&T, Sprint, U.S. Cellular and Verizon at the very least.

However, much of the Moto X remains a secret including its software which is said to be smart and its overall design which we know will be customizable thanks to Motorola’s confirmation and leaks that have shown colored casings. It appears though that we now have a good idea about what to expect from the Moto X design as a photo of what is said to be the Moto X has appeared on Chinese microblogging site Weibo, courtesy of Blog of Mobile. 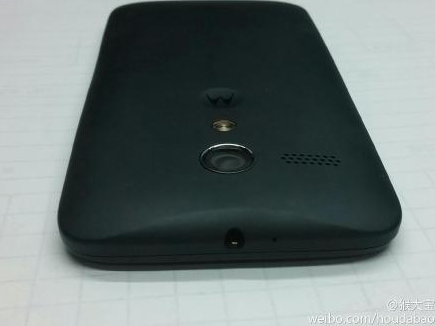 A purported photo of the Moto X.

The photo depicts a device with a Motorola logo in the center, complete with a a black matte finish and a camera and headphone jack that sit in the middle of the device’s frame.

While this isn’t confirmed to be the Moto X, it appears likely and while all variants may not look like this, it’s a sign that the Moto X will be coming with a cheap look rather than a premium one.

All along, we’ve heard that the Moto X would be a cheap option for smartphone shoppers and it appears that the design is going to be very fitting.