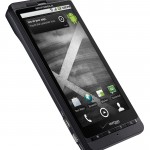 Making a continued resurgence from obscurity, Motorola looks to steal some of the blogosphere chatter with the announcement of its Droid X smartphone on Verizon’s network today. The Droid X lands on July 15 and will come with Android 2.1 with a promised upgrade to 2.2 and Flash 10.1 support when Froyo is finalized in late summer. Besides full Google integration, the Droid X boasts some impressive features:

Verizon and Motorola released the first Droid phone back in November of 2009 and has since grown to be the most popular Android device and market share for Android-powered devices continue to grow. At the Droid X event, Eric Schmidt claims 160,000 Android phones are activated every day with access to over 65,000 apps in the Android Market. Even though many before it had claimed to be the next “iPhone killer,” the Droid X is perhaps the most legitimate device yet to challenge the iPhone’s dominance.