One of my personal favorite Android accessory, the MOTOACTV sports watch, which is a smart watch made by Motorola, has just received a $100 price cut making it even more affordable. With summer here, the MOTOACTV sports watch will help you track calories burned, steps taken, miles ran, or distance pedaled. The watch comes with 8 GB of on-board storage for $150 or 16 GB for $200. Additionally, a multi-sport edition with the ability to track your golf swing retails for $300. 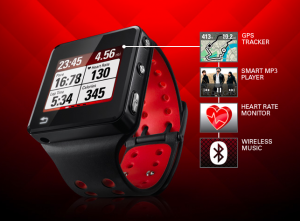 The $150 price point definitely makes the wrist companion more affordable and competitive when compared with similar offerings, such as the Nike+ Fuelband, which retails for the same price and is more geared at beginner runners than enthusiasts, and also the Nike+ SportWatch, which lacks the on-board storage for you to take your favorite tunes with you on your watch.

For the fitness-crazed, the MOTOACTV can also pair with ANT+ accessories as well, such as a heart rate monitor.

While the MOTOACTV can be paired with a smartphone to synchronize your progress and fitness record with Motorola’s cloud, the watch can also be operated independent of a phone where it could also be used as a pedometer and music player. When working out with the watch, the MOTOACTV watch recognizes which music track amps you up and will help to make your runs more competitive.

Most recently, Motorola had updated the sports watch to include more features and functionality, including notifying you of Twitter messages and Facebook streams when paired with a compatible Android smartphone. The watch also has built-in WiFi and Bluetooth, and in the past developers had been able to hack the watch to run Android Honeycomb, making it the world’s smallest Android tablet.