While Black Friday is a popular shopping event, Cyber Monday is just as exciting. Today Motorola made a few announcements and revealed some rather impressive Cyber Monday 2015 deals for those looking to save a bundle of cash on a new smartphone or smartwatch.

Right now all the attention is on the loads of Black Friday deals that will take place on Thanksgiving, and all weekend long. However, for millions of others that don’t want to wait in long lines, Cyber Monday is the ultimate day to shop. Motorola is getting in on the action, and we have all the details below.

This morning Motorola detailed three pretty impressive deals for their most popular products, but they’re for devices released last year. Hopefully this is just the first teaser of many, or this could be all they have planed. Either way, below are the links to buy the Moto 360 for 50% off, a new smartphone and more. 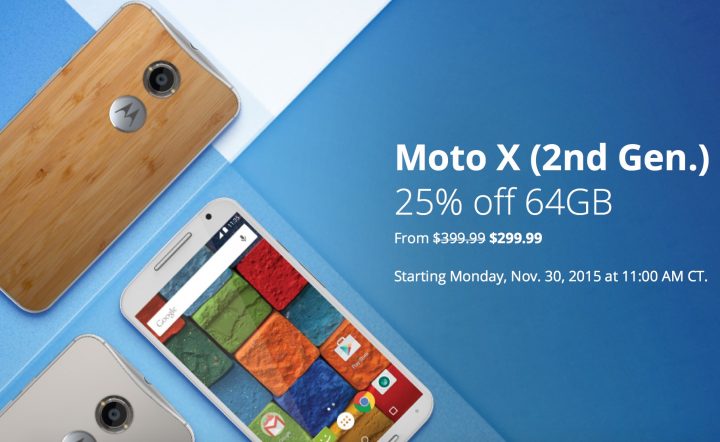 Rather than wait in long lines out in the cold, deal with hoards of people at Walmart, or anything else for that matter, simply wait for Cyber Monday. The holiday has grown in recent years to offer as much as, or more than Black Friday, but for people who’d rather do all the shopping online.

The links above all head to the new 2015 models of the Moto 360 smartwatch and Moto G, which aren’t for sale. For whatever reason Motorola’s Cyber Monday 2015 deals are all devices released last year. Offering huge savings of over $100 on each item, but devices that were released last year and already have been on sale multiple times.

That being said, those looking to get one of the best mid-range Android smartphones can get the Moto G for only $99, or the still highly capable Moto 360 smartwatch at huge discounts. All of these deals go live on Monday at 11:00 AM CT. Some are one-day sales that will likely sell out extremely fast, and others last for an entire week. We’re hoping more deals and additional savings on 2015 models will appear on Monday. If not, get last years best devices for a heavy discount and enjoy. We’ll update if more deals are confirmed.