Before today, we had a pretty good idea about what the Motorola Droid 3 would be bringing to the table when it arrives on Verizon, possibly as soon as July 7th. Today, we’ve got confirmation on the specifications that are going to make up Verizon’s third incarnation of their QWERTY design Droid. 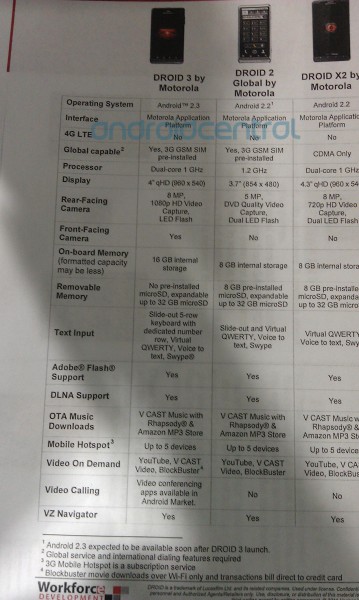 The information comes a side-by-side spec comparison sheet dug up by Android Central showing the Verizon’s Droid 3 placed next to the Gingerbread-less Motorola Droid 2 Global and the Motorola Droid X2.

It’ll have 16GB of internal memory but no microSD card pre-installed, DLNA support, a front facing camera, and unfortunately, it’s not going to be coming with 4G LTE support which is something we’ve known for quite some time. It’s also going to launch with Android 2.3 Gingerbread.

Now that this is out, expect an announcement soon, possibly as soon as tomorrow. Anyone going to make this their next phone?