Successors to a few of the older Droid phones have started hitting Verizon recently starting with the HTC Droid Incredible 2 and more recently, the launch of the Motorola Droid X2. And now it appears that we finally have some details on another upcoming Droid heir, the Motorola Droid 3. 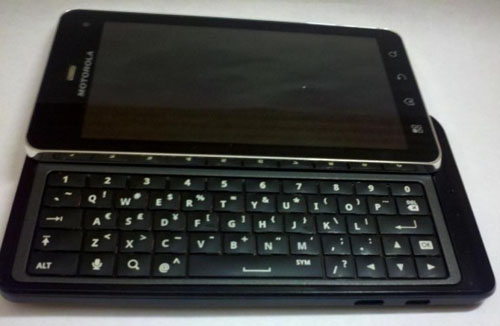 Techno Buffalo has leaked some possible specifications for the Motorola Droid 3 and it appears that the Verizon’s plan for the Droid 3 resemble those of the Droid X2 and the Droid Incredible 2. It won’t feature LTE but will have a bunch of hardware upgrades.

The Droid 3 will apparently feature a bump to a 4-inch high resolution qHD display and it will also likely be featuring a dual-core processor, likely a Tegra 2 from NVIDIA. Sound familiar? These specs are the same thing found in the new Droid X2.

The QWERTY keyboard is still alive and well, but Verizon has apparently added a fifth row of keys that will include dedicated number buttons. Other features include an HDMI out slot, a front facing camera with an unknown megapixel count, an 8MP rear camera, and again, no LTE support.

It appears that a launch is on the horizon as the phone is expected to be released at some point next month, pricing unknown.

That photo you see up there is from Howards Forums and is the first photo showing off the Droid 3’s new keyboard.