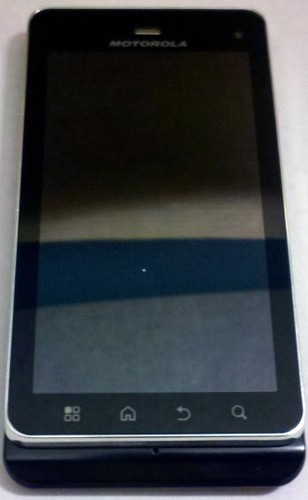 A leaked image of a forthcoming Motorola Droid 3 Android smartphone appeared on Howard Forums depicting another addition to the carrier’s Droid lineup, though it seems unlikely that the Droid 3 will be a 4G LTE smartphone. At the Consumer Electronics Show earlier this year, the carrier had announced 4 4G LTE smartphones, one each from HTC (Thunderbolt), Samsung (Stealth), LG (Revolution), and Motorola (Droid Bionic).

Not a lot of information is known still about the Droid 3. The device will retain its landscape-oriented sliding form factor to reveal a full QWERTY keyboard. The front top touchscreen portion resembles an iPhone 4 with straight edges, curved corners, and chrome trim on the sides. Overall, it seems to be a nice evolution of the Droid 2 and the Droid 1.