Motorola Droid 4 Launch Could Be Just Weeks Away

It appears that crowded Android smartphone market might see even more activity in the near future as the Motorola Droid 4 has appeared in Verizon’s systems, a sign that a launch could be as close as December.

Just a few weeks ago, we, rather surprisingly, saw the Droid 4 pop up in a photo. We say surprisingly because just a few short weeks before that, Motorola and Verizon had launched the Motorola Droid 3. So, we started to get the feeling that Moto and Big Red might be planning a refresh in the same fashion as the Droid 2 and the Droid 2 Global.

Turns out, that doesn’t seem to be too much of a stretch.

The Droid 4 has appeared in a couple of Verizon systems showing off its 4G LTE capabilities and its apparent readiness to hit the market for consumption.

November is a very crowded month for Verizon with the Samsung Galaxy Nexus, Motorola Droid RAZR and the HTC Rezound so we don’t expect it to launch this month. However, December is void of any major smartphone launches and it appears to be a perfect month for Big Red and Verizon to release another device. 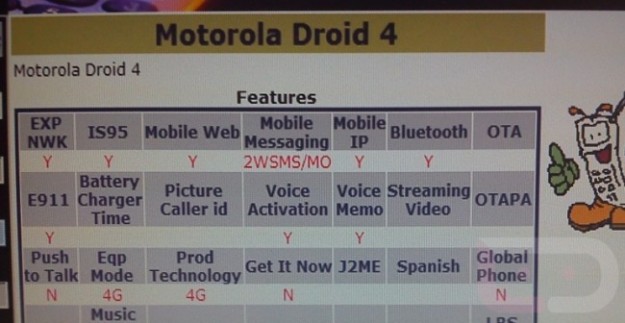 It’s also possible that we might not see this phone until 2012.

Those who covet physical keyboards and 4G LTE will hope it comes sooner though.