The Motorola Droid Bionic is practically here. There’s no official release date from Verizon just yet, but new leaks and information from a trusted source leads us to believe that you’ll be able to go buy a Droid Bionic on September 8th.

The new information comes to us by way of Droid-Life, which posted up a tempting look at the Droid Bionic features, specs and accessories. I think this may be one of the most accessorized Android phones to launch on Verizon.

In the image below, you see what appears to be Droid Bionic Specs and the following note, “The Wireless Device Group introduces Droid Bionic by Motorola to the product line-up! This device will launch in all channels September 8th, 2011!” 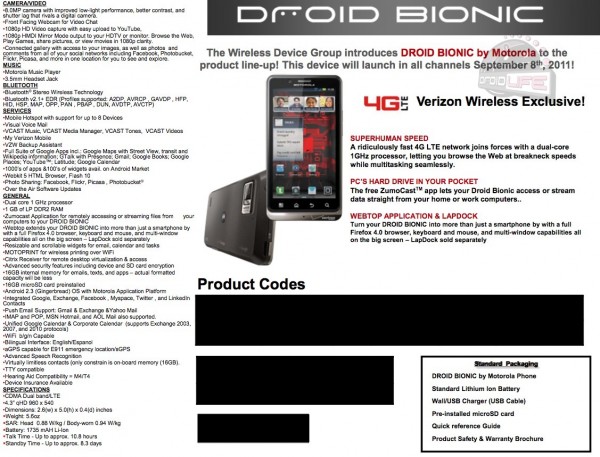 There’s nothing surprising about the specs shown on this leaked document, but the feature list leaked in a separate slide does have some nice additions. Specifically, the ability to video chat over 3G, 4G and WiFi with Google Talk. You can also use the phone as a mobile hotspot, connecting up to 8 devices to the 4G LTE device.

The real shocker to me is the number of accessories that Motorola is bringing to market, hopefully all of which will be available at launch. The Droid Bionic has more than your standard navigation dock and plastic case, such as the Motorola Lapdock and webtop accessories.

Here’s a rundown of the Motorola Droid Bionic accessories we expect to see; 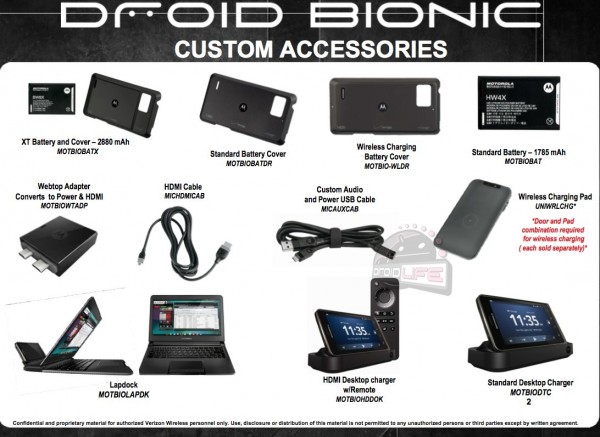 Which of these will you be buying? Don’t forget Costco is rumored to have a bundle for $299 which includes a number of accessories for the Droid Bionic.

With a $300 estimated two-year contract price and all these accessories, you might find it hard to get out of Verizon without spending $400 to $500, or much more if you want the webtop Lapdock.