The update finally appeared on Verizon’s website today which means that the carrier has approved it for roll out which means Droid Bionic owners should be getting their taste of Ice Cream Sandwich in the near future. No date is known but it shouldn’t be more than a few days.

Previously, we had been told that a soak test would be rolling out tomorrow, October 19, and it appears that this might be the case as Verizon generally rolls out its updates in phases with the initial recipients essentially being used to test the update. Then, if all goes well, the update generally rolls out to everyone a few days after that.

So, it could be that the approved update starts hitting devices tomorrow. 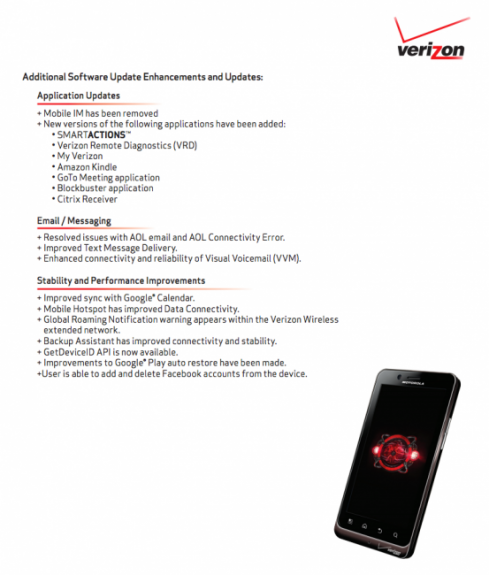 The update will take the Droid Bionic up to Android 4.0.4 Ice Cream Sandwich and will bring all of the goodies that come along with any old Ice Cream Sandwich update. This means the new user interface, the new launch bar, a better camera application, improved browser, Face Unlock, better multitasking and more. It’s a huge step up from the Android 2.3 Gingerbread update that was previously running on the Droid Bionic.

There will also be stability and performance enhancements that will be coming with the update which should shore up any issues that Droid Bionic owners have been having with Android.

Droid Bionic owners should know that the update is around 370MB in size which means that it will take a bit to download and install.

The update, which was originally supposed to be out in Q3 of this year, was pushed to Q4 due to unknown reasons. The assumed reason was because of similar issues that arose with the Droid RAZR and Droid RAZR MAXX updates. Those devices have yet to receive a bug fix update for Ice Cream Sandwich.

So, be on the look out soon Droid Bionic owners, it looks like the Droid Bionic update is coming soon, maybe even at the same time as the LG Lucid ICS update.

Thanks to everyone who sent this in!