According to a post on Android Forums, the Droid Bionic Ice Cream Sandwich update, and specifically build .244 leaked out a short time ago, and it would appear that the software was not pulled from a Quality Assurance server (read: testing server) but rather from a staging server which means that the software could be rolling out soon. 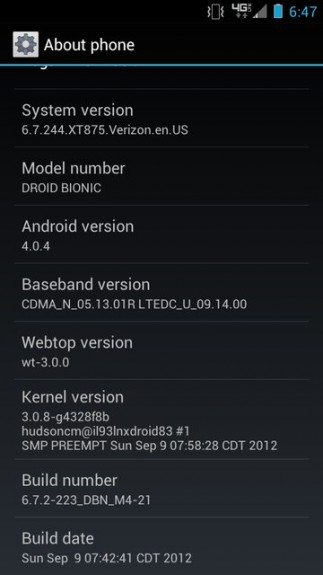 And that unfortunately is a possibility given that HTC, a Motorola competitor, completely missed the ICS release date windows for two Verizon devices including the HTC ThunderBolt and the Droid Incredible 2.

Motorola has said that the Droid Bionic Ice Cream Sandwich update will be out in Q3 which leaves September as the only month left in the roll out window. The company originally had promised the update for ‘early Q3’ but it appears that the Droid RAZR and Droid RAZR MAXX ICS updates pushed it back.

At this point, this is as good as it’s going to get for Droid Bionic owners waiting for the update as Motorola and Verizon continue to remain silent about the software.

And while the software has leaked, we highly advise Droid Bionic owners to wait for the official Ice Cream Sandwich roll out as the leaked software could cause quite a few headaches for those not well-versed in the art of unofficial software.