As expected, the Motorola Droid Bionic Ice Cream Sandwich update still isn’t available for many owners of the device, after the update started rolling out on Friday of last week.

Over the weekend, we heard from many Droid Bionic owners who claim that their device still haven’t received the update to Android 4.0 Ice Cream Sandwich. This coming after Verizon started rolling out the update in phases on Friday.

Those who still don’t have Ice Cream Sandwich shouldn’t panic as this is exactly what we told you would happen on Friday. The Droid Bionic Ice Cream Sandwich roll out appears to be similar to the Droid RAZR and Droid RAZR MAXX ICS roll outs in that it was announced as arriving in phases but Verizon’s rolling it out slowly so as to make sure it’s working and so as not to overload its servers. 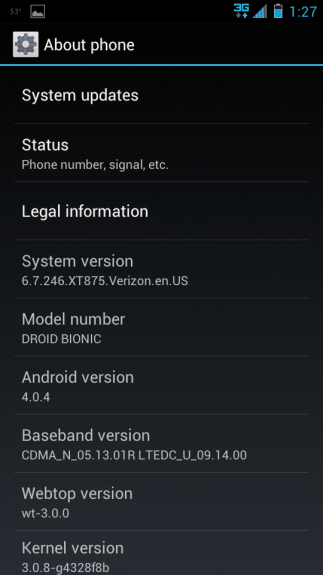 As expected, the Droid Bionic ICS update is rolling out slowly.

Again, as expected, a majority of the people that received the update are either soak testers or a small minority of folks who are being used to ensure that the update is fully functional and working without any massive bugs.

What this means is that those who have yet to receive the update will likely be the beneficiaries of Android 4.0 Ice Cream Sandwich in the near future, probably sometime this week.

Again, this is how Verizon seems to roll out these larger updates. After all is well, it will then make an update available for the masses. And now that the Droid Bionic seems to be running smoothly, a much larger roll out should occur soon.

So, to those that haven’t received the update, remain patient. Just because the update hasn’t arrived yet doesn’t mean that it’s delayed or cancelled. Instead, this is all part of the usual Verizon roll out process.

Who still has yet to receive it?