The Motorola Droid HD–or Droid RAZR depending on the latest leak–will not only be a mashup of two of Motorola’s iconic brands, but also of some of the hottest technology features talked about today. The smartphone, which recently was caught on Verizon Wireless’s Device Management computer system, is reported to be a 4G LTE smartphone, like the Motorola Droid Bionic before it. Also, like the Droid Bionic, this device will utilize a qHD resolution display that’s capable of a resolution of 960 X 540 pixels. 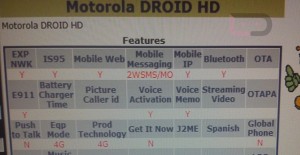 However, unlike the Droid Bionic, the Droid HD will not utlize the PenTile display and will instead opt for a Super AMOLED qHD resolution, though that information was unconfirmed.

And while the device will support Verizon’s fast 4G LTE network for lightning fast data transfers, the device won’t be a world-phone, unlike the Droid Bionic.