While Motorola and Verizon haven’t confirmed anything just yet, it appears that the Motorola Droid RAZR HD will likely be coming with Android 4.0 Ice Cream Sandwich instead of Android 4.1 Jelly Bean, something that should be considered a weakness by many potential customers.

Over the weekend, a few tutorial videos for the Motorola Droid RAZR HD leaked out to the surface. The videos gave prospective customers the first good look at the Droid RAZR HD hardware and software. And while the videos didn’t specifically refer to Android 4.0 Ice Cream Sandwich on board, one of the videos seems to point to that as being the case.

One of the videos called ‘Using Your Device’ shows off the Droid RAZR HD in action and shows owners how to use several on board functions.

The video though doesn’t show the expanded Gmail Notifications that are found in Android 4.1 Jelly Bean which has led us to suspect that Android 4.0 ICS will indeed be on board the Droid RAZR HD when it arrives. It’s possible that Motorola hid that feature in the video because it wants to surprise people but remember, this video was not leaked by Motorola and it probably depicts the software that will go live with the device itself.

So, it looks like Ice Cream Sandwich is likely going to be the software that will arrive on the Droid RAZR HD. Backing that up is the fact that test devices that have leaked in the wild have been running Android 4.0 ICS and we saw that software pop up in benchmarks for the Droid RAZR HD.

With all of that evidence, it would be a shock to see Android 4.1 Jelly Bean appear as the stock software of the next-generation Droid RAZR.

Now, that wouldn’t be so bad if it weren’t for Motorola and Verizon’s past with major Android updates which has been suspect to say the least.

It took them many, many months to get the original Droid RAZR outfitted with ICS and even then the software was buggy. Same goes for the Droid RAZR MAXX and Droid 4 who saw their ICS updates promised in the “coming weeks” only to see their updates arrive months later.

The same thing could happen with the Droid RAZR HD. We could see Android 4.0 ICS at launch and then Android 4.1 Jelly Bean promised in the weeks ahead.

If true, that could mean that owners will be waiting on the software for months.

This wouldn’t be too big of a deal if Android 4.1 Jelly Bean wasn’t such a huge upgrade over Android 4.0 ICS. Jelly Bean makes devices faster, smoother and smarter.

Owners probably wouldn’t have a problem either if Motorola and Verizon offered a specific roll out date if Jelly Bean’s not on board. They likely won’t, companies rarely ever do that.

And the lack of Jelly Bean wouldn’t be as big of an issue if the device was released on September 5th. Instead, we’re hearing October at the earliest which could mean the Jelly Bean date wouldn’t roll out until 2013. 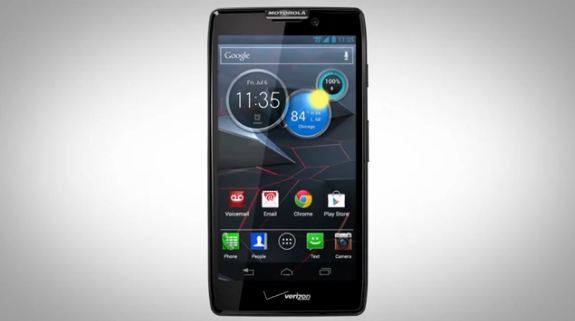 The Droid RAZR HD looks like it will launch with ICS.

So, it’s looking like there will be at least one disappointment on board the Droid RAZR HD at launch and that’s unacceptable with the way that the market is right now.

The iPhone 5 is coming up, a new Nexus is likely only months away and the Droid RAZR HD’s biggest Android competition at the moment, the Samsung Galaxy S III is rumored to be getting Jelly Bean on August 29th.

Hopefully, the Droid RAZR HD has Jelly Bean on it when it launches September 5th but we aren’t holding our breath.