Motorola has sent an invite for a press event set to take place on September 5th and it could very well be for the launch of the Motorola Droid RAZR HD.

The invite is for an event in New York City and it will be taking place just after the launch of the Samsung Galaxy Note 2 and just before the rumored launch of the iPhone 5.

Motorola’s invite doesn’t allude to anything in particular though the Motorola Droid RAZR HD is the only event worthy device on our radar at the moment that’s headed to Verizon. And that means that it’s all but certain to launch that day.

The only clue that we have to go on is that it says “Motorola. On Display.” and we imagine that the display part alludes to the high-definition display that will be coming with the Motorola Droid RAZR HD. The Droid RAZR HD is said to sport a 720p display, the first Droid branded device to come with such a feature. 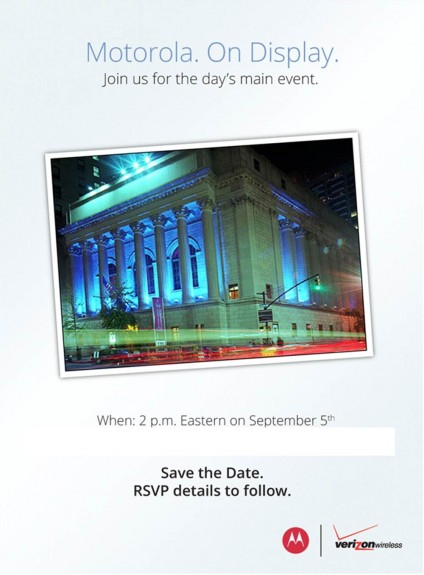 The Droid RAZR HD will likely launch on September 5th.

It’s also possible that this is for something else entirely but at this point, it appears unlikely.

The Motorola Droid RAZR HD has been one of the most heavily rumored smartphone launches in recent weeks though Motorola ad Verizon have yet to unveil anything specific about the device.

Leaked photos and benchmarks have emerged to paint a picture of a device that will replace the original Motorola Droid RAZR which launched in November 2011.

The device has said to have a release date sometime in either October or November, however, with a launch in early September, it’s possible that it could come sooner than that.

It’s also possible that Motorola just wants to get the announcement out before the iPhone 5 which again, has a rumored launch date of September 12th.

Other rumored specifications of the Motorola Droid RAZR HD include a design similar to the original RAZR with a Kevlar backing, 4G LTE data speeds, a dual-core Snapdragon S4 processor, and Android 4.0 Ice Cream Sandwich and not Android 4.1 Jelly Bean, Google’s latest piece of mobile software.