Today in New York City, Motorola finally took the veil off of the Motorola Droid RAZR HD, the company’s latest high-end Android smartphone and latest device to use the Droid RAZR branding.

The Droid RAZR HD employs a 4.7-inch display that offers amazing colors and HD quality. This is much bigger than the screens found on the original Droid RAZRs which used 4.3-inch displays. 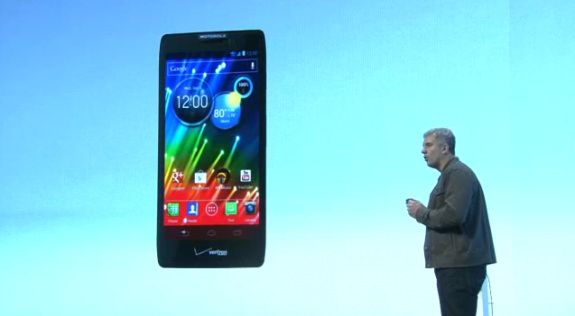 It also features a dual-core processor and Verizon’s 4G LTE network. It will also have the Chrome browser pre-installed, the first Motorola smartphone to come with Chrome to come pre-installed. Motorola says that Chrome is up to 40% faster than browsers like Safari.

Motorola has also decided to up the battery life in the Droid RAZR HD battery and it will come with a 2,500 mAh battery. It will feature 16 hours of talk time. This isn’t as big as the Droid RAZR MAXX’s battery but it’s definitely big.

It will also come with a slim form factor which checks in at 8.4mm. It will also have Android 4.0 Ice Cream Sandwich on board. They are upgradable to Android 4.1 Jelly Bean and those updates will come by the end of 2012.

Motorola is mum on a release date for the Droid RAZR HD though it says that it will be out before the holidays. We have heard October or November previously, but it’s unclear if that’s what’s going to take place.

As for pricing, Motorola has not specified how much the Droid RAZR HD will cost though we suspect it won’t cost more than $199.99 on-contract.