Accessories for the Motorola Droid RAZR HD have started to arrive in select Verizon stores ahead of the device’s eventual release on Verizon’s 4G LTE network.

Droid-Life unearthed an image of a Droid RAZR HD screen protector that apparently arrived at a Verizon retail store. The arrival of the accessories is a sign that a launch could be closer than customers think though it’s not a 100 percent guarantee that one is around the corner.

We have heard that the Droid RAZR HD and its counter-part, the Droid RAZR MAXX HD may be facing release date delays until November or beyond because of antenna issues but the fact that accessories are now arriving in-stores means that we could see a release date come sooner than that. The date of October 18th has apparently been thrown around as a possible date for the devices though Verizon hasn’t confirmed anything yet.

Originally, the release dates on both devices were pegged for sometime in October. 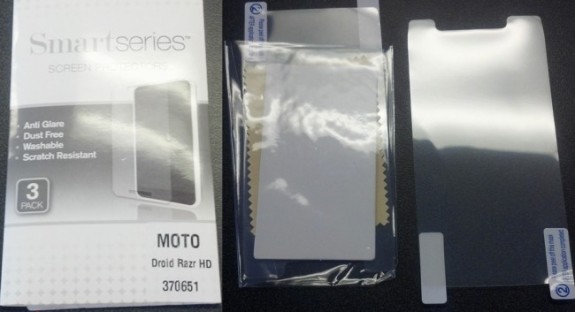 Droid RAZR HD accessories have begun arriving ahead of the device’s launch.

Motorola has not said anything one or another and we don’t expect it to. The only announcement that we should hear about is the official release date and pricing announcement from Verizon.

Both the Droid RAZR HD and Droid RAZR MAXX HD are highly anticipated amongst those who not only love Motorola designed phones but Android in general due to their solid RAZR design and HD displays.

The Droid RAZR MAXX HD also brings a massive battery that will allow users to eat up 21 hours of continuous talk time or 8 hours when browsing the web using 4G LTE. The Droid RAZR HD also has a massive 2,500 mAh battery as well.

The devices will be a part of Verizon’s massive launch later this year, a launch that should see the Droid Incredible X, Samsung Galaxy Note 2, Lumia 920, HTC 8X Windows Phone, and a whole lot more.

And given the stiff competition, we hope that Motorola is able to get these highly desirable phones out soon.