Verizon still hasn’t officially announced the release date for the Motorola Droid RAZR but it doesn’t really need to anymore. A official document has surfaced on the web today and it confirms Big Red’s plan to release this phone on the day that just about everyone thought was going to be its release date. That date? Why November 10th, of course.

The Droid RAZR is going to cost $300 through Verizon with a new two year contract and those of you looking to get it off contract are going to have to pay $650 bucks. A tall order. 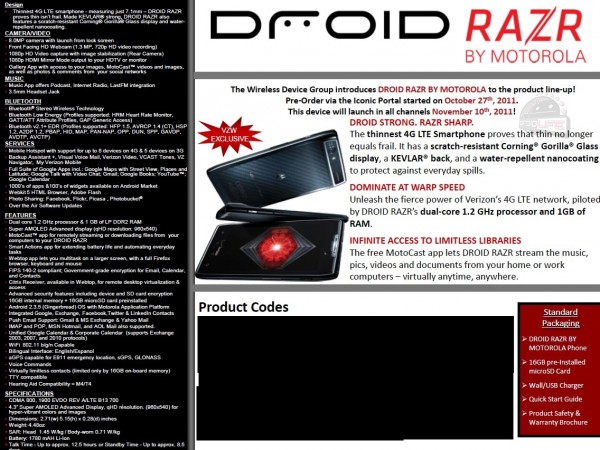 As for the specifications, it has a 4.3-inch Super AMOLED display with advanced qHD resolution, a 1.2GHz dual-core processor, 1800mah battery, mobile hotspot support, 1GB of RAM, a rear camera capable of shooting 1080p video, and a 7.1mm thin design.

So, if you’re in the market for a new phone, this is definitely a phone to take a look at.

Now, if we only knew when its competitors (Galaxy Nexus, HTC Rezound) were coming out.