Motorola ULTRA and MAXX owners have patiently been waiting for an update since first getting Android 4.4 back in December of 2013, which was actually delayed well into January. Then, thanks to a few quick updates by Google to Android as a whole each minor update coming from Motorola and Verizon had to be delayed.

Google first released Android 4.4 KitKat back in November of last year, and the software quickly spread to all Nexus devices, Moto X users, and eventually newer devices from almost all manufacturers. And that includes the DROID Ultra lineup as we mentioned above. However, we’re now hearing it’s about to get the latest and greatest.

Motorola announced plans to skip Android 4.4.1 and go right to 4.4.2 KitKat, but then Google released Android 4.4.3 which further delayed KitKat update plans. The same happened again, and as of right now DROID Ultra & MAXX owners are still stuck on the bug-filled original KitKat update. However, last night Android 4.4.4 KitKat surfaced, and should be coming soon.

In Motorola’s usual fashion beta tests for new software started arriving in May, but were eventually put on hold as mentioned above. Then last month one of Motorola’s own Senior Software employees confirmed Android 4.4.3 was coming soon, however that too never arrived. It’s safe to say users are frustrated, and wondering when they’ll get all the improvements, fixes, and security patches for their smartphones.

Last night we finally received good news. It appears as of the Motorola DROID Ultra, MAXX, and Mini are all set to receive the absolute latest Android 4.4.4 KitKat update in the very near future.

The official Motorola Feedback Network, which is designed to let hand-picked users test software ahead of nationwide updates, confirmed that the DROID Ultra & Maxx lineup was finally going to receive an update. After Android 4.4.3 was delayed in favor of Android 4.4.4, it’s about to finally arrive.

According to Droid-Life the feedback network has reached out to individuals taking part of the procedure, and will start sending the Moto DROID Ultra & MAXX Android 4.4.4 KitKat update out in the coming days.  This is what they call a “soak test” which means the software upgrade has reached its final testing phase, and needs one last run and test before Verizon issues the update out to all owners of the handset. 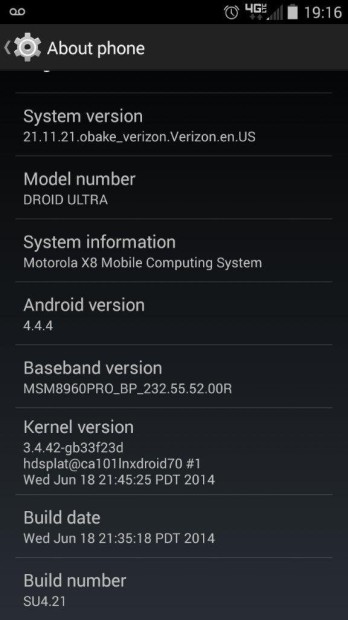 Typically once Motorola soak test invites go out we start to see the update appear within 24-48 hours, and once it’s been approved for a full launch we’ll update with additional details. Past soak tests lasted less than a week, and are often times quickly followed by the official update.

So what does this mean for owners? The DROID Ultra and MAXX Android 4.4.4 KitKat update is most likely less than two weeks away, and should be arriving sooner rather than later. Android 4.4.4 is a small bug and security patch over the previous Android 4.4.3, so only minor changes were needed before preparing for a full launch.

This will be one of the first Verizon Wireless smartphones to receive the latest Android 4.4.4 KitKat, as Motorola continues to honor its promise of fast and timely software updates. Since being bought by Google they’ve continued to improve in this area, and hopefully owners of the impressive DROID MAXX will receive Android 4.4.4 KitKat in the coming days or weeks.

It’s worth noting that we’ve yet to hear any details regarding the original DROID RAZR HD from 2012, but considering it was updated to Android 4.4.2 back in May, a quick update to the latest Android 4.4.4 KitKat could be in the cards for those aging smartphones too.