Last month Motorola started pushing out updates to the Moto X which seriously improved the overall camera experience with the 10 megapixel (clear pixel) camera on the smartphone, and we later learned a similar update was coming soon for the DROIDS. Well, today Verizon has informed us the latest update is on the way soon, and it has plenty of changes.

The Motorola DROID Ultra, Ultra MAXX, and DROID Mini are all set to receive an update this week that will deliver plenty of much needed changes and tweaks. Aside from the camera fixes we’ll get improved 4G LTE, better battery performance and more according to the support documents spotted by Droid-Life. The full changelog can be found below.

The first thing you’ll notice is the update will deliver 50GB of free Google Drive cloud storage for the devices, so that’s a nice addition considering all DROID’s also get 6 months of free Google Play All Access Music. Google and Motorola are really handing out the freebies with these smartphones. Checking out the changelog below you’ll notice plenty of new features and bug fixes coming soon.

The camera will be much improved. Everything from auto-focus, colors, white balance and HDR, which was all given to the Moto X as of late. The wireless charging support and UI has been improved, as has 4G LTE support, stability, and speed, so that should be a noticeable change for many users. For those enjoying NFL Mobile like myself, that’s been revamped with the new version here. The app is a mess, but the service it provides is bar none the best around for viewing NFL games. 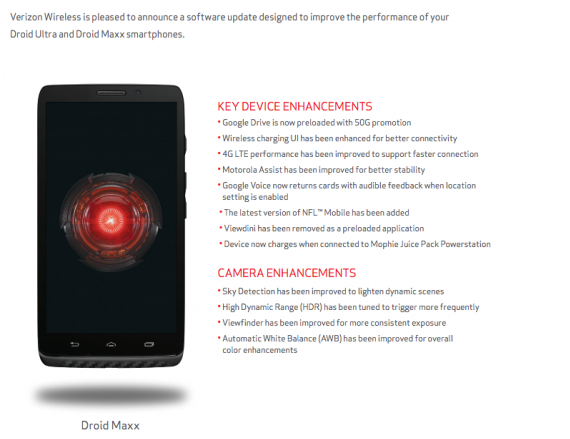 Motorola Assist has been improved, and in a rare move Verizon’s actually removing some of its bloatware of preinstalled applications with this update, so that’s a plus. For now the latest update detailed today for the DROID lineup isn’t yet rolling out to all users, and is being beta tested, but should arrive by the end of the week.

As usual, the update will be available over the air and arrive without any action from the user. Alternatively you can manually check for updates once reports of the update arriving start showing up, to pull it down and update ahead of time. That ClearPixel camera is about to get much improved.