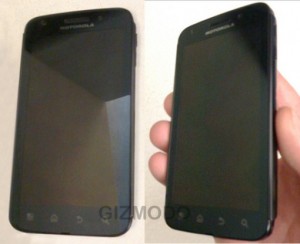 While Motorola is reportedly targeting AT&T with its rumored Motorola Olympus Android smartphone for an end of January launch, the handset maker is also working on Verizon Wireless with two new Android products–a smartphone and a tablet–that will make use of a dual-core chip solution, most likely the NVIDIA Tegra 2, and will come with LTE support. These devices are speculated o arrive on Verizon Wireless’s network by February or March 2011. In the past, the handset maker has stated that it would wait for a future version of Android that is optimized for tablets, so it’s unclear if February will see the release of Android 3.0 Honeycomb, a version of Android that is widely believed to bring better tablet support.

Also, it’s unclear right now if these devices will appear under Verizon Wireless’s Droid brand, a moniker that the company has thus far reserved for higher-end devices.

As it stands right now, the Etna is rumored to be the smartphone version while Everest will be a tablet form factor. The Etna and the Olympus for AT&T are said to have identical body casings, so it’s unclear if Motorola will be making a CDMA/LTE and a GSM/HSPA variants of the phone, or if the phone will come with a global CDMA/GSM radio, similar to the Motorola Droid Pro and Droid 2 Global Edition, along with LTE support; the Droid Pro and Droid 2 Global Edition has CDMA support along with quad-band GSM and tri-band HSPA for global travel–both world phone devices have the 3G band that is compatible with AT&T’s network in the U.S. although they will only work with Verizon’s network domestically.