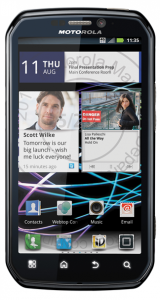 If that 24 hour sale for the HTC EVO 3D didn’t interest you and you’ve been waiting for a deal on the Motorola Photon 4G, well then you’ll be elated to know that Radio Shack has decided to drop the price of Sprint’s newest WiMax smartphone all the way down to $99.99 on a new two-year contract.

Honestly, that is not a bad deal whatsoever so if this is a phone you’ve been stalking, now might be the time to pounce.

Sprint does have a fairly crowded WiMax lineup right now so the Photon 4G may have a hard time standing out to customers and that might be why Radio Shack has decided to drop it so low.

That and the Galaxy S II is on the way.

This appears to be a special offer and not a permanent one so if you’re looking to get $100 off a new phone that appears to be a solid device, then you can head here to Radio Shack and take advantage of the retailer’s kindness.