The Motorola Photon Q 4G LTE is the first 4G LTE phone for Sprint to bring a slide out QWERTY keyboard to the carrier’s growing 4G LTE network.

The Photon Q 4G LTE is very similar to the Motorola Droid 4 on Verizon, but Motorola delivers a vastly improved camera and a faster processor.

The Photon Q 4G LTE offers one of the best smartphone keyboards around and beautiful bright display, but the lack of significant 4G LTE coverage and poor 3G performance limits the appeal of this $200 smartphone. 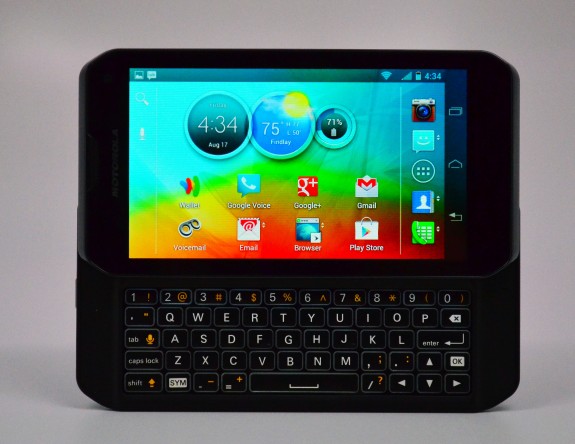 Hardware and software tour of the Photon Q 4G LTE including buttons, widgets and the great keyboard.

The Photon Q 4G LTE is bulkier than most new phones because it includes a slide out full QWERTY keyboard. Despite the added thickness and weight, the Photon Q 4G LTE fits in a pocket and is easy to hold for a long reading or watching session.

Motorola chose a textured plastic finish on the back of the Photon Q 4G LTE, but it doesn’t make it any easier to hold onto the phone. This is manly an issue when trying to slide the keyboard open. 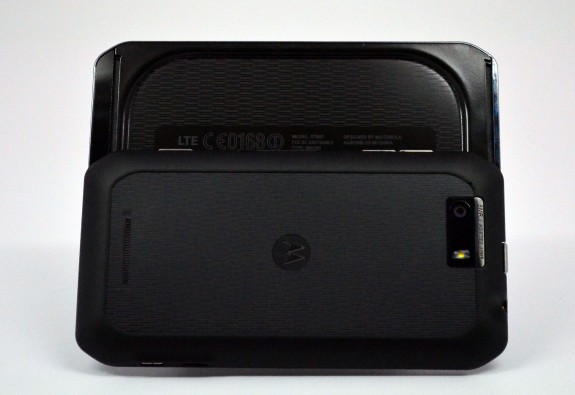 The back of the Photon Q 4G LTE is slick.

The slide out keyboard is spring assisted, which means after a small push the keyboard will open or close the rest of the way. The slide feels sturdy, with a minor amount of wiggle while closed.

Once open, the five-row keyboard reveals itself. The laser cut keyboard remains one of my favorite smartphone keyboards thanks to great layout, key spacing and backlighting that works wonderfully. The keys may not offer as much travel as the Samsung Stratosphere on Verizon, but there is a satisfying tactile feel and an audible “click-click” when typing. 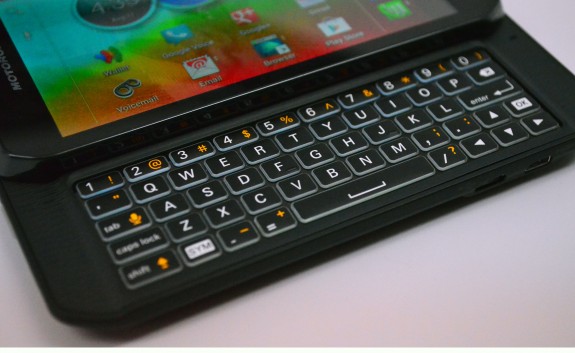 Forget BlackBerry, this keyboard is amazing.

The right side features volume control and a dedicated camera shutter. I love a hardware camera shutter button, but unfortunately it will not wake and unlock the phone right to the camera. A power button sits center on the top of the device and MicroHDMi and MicroUSB ports sit on the left. 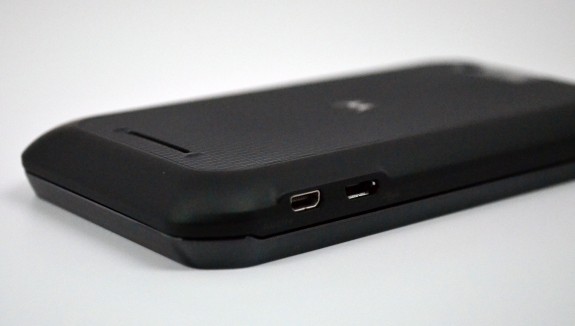 Just above the earpiece is a large LED notification bar. This bar is big and bright. Users who love to glance at a phone for notifications will love this over a tiny circle.

There is no Spint logo on the device, leaving a clean front and back, save the Motorola M in the center and Motorola across the front near the earpiece.

The Photon Q 4G LTE features one of the brightest displays I’ve used, and colors look god too thanks to the ColorBoost technology. The 4.3-inch display is easy to use indoors and out, and auto brightness works very well to boost brightness when needed without killing battery life. 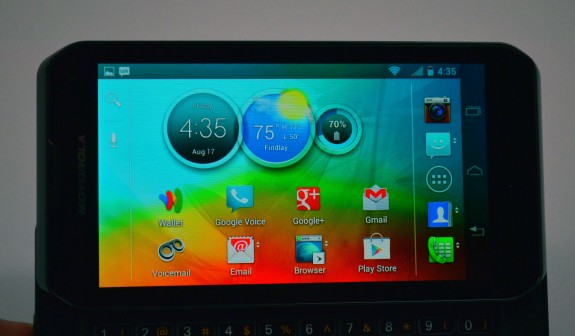 The display is a 960 x 540, shy of the 720P HD displays found on many competing Android phones, but still  nice screen. The display is quit bright, and very easy to use outdoors, even on a sunny day.

is not as crisp as the iPhone 4S and white backgrounds aren’t as white, but the text is adequate.

Motorola packs in a dual-core 1.5GHz processor and 1GB of RAM which delivers snappy performance even with Motorola’s MotoBlur skin on top. The phone includes 8GB of storage and a MicroSD card slot capable of adding an additional 32GB of space.

Apps launch almost instantly and the multitasking menu is fast to open and switch. The lock screen offers shortcuts to the camera, phone and text, all of which open fast enough to be useful.

Games like Dead Trigger and Fruit Ninja run great with no lags or slowdowns even when fighting multiple zombies or going for a 6 fruit combo during a frenzy.

Sprint currently offers 4G LTE connectivity in a handful of cities, the closest of which requires a flight to test. Instead, I tested the Motorola Photon Q 4G LTE on Sprint’s 3G network. Sadly, the 3G connection is slower than Verizon in many parts of my town, and nonexistent in my neighborhood. 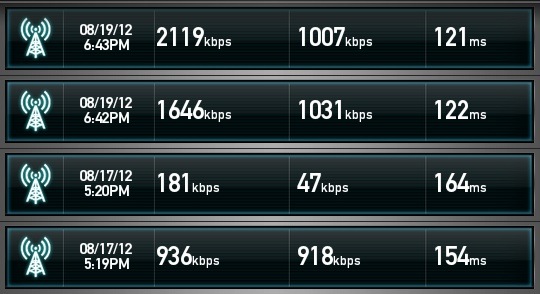 Speeds on Sprint varied greatly, but no 4G LTE speedtests were possible.

Traveling to the other end of town Sprint 3G delivers decent upload and download speeds, shown above. The coverage varies greatly by location, so be sure to check Sprint performance. The Photon Q 4G LTE doesn’t require 4G LTE to work, but without coverage and announced coverage plans it’s not a selling point for most potential Sprint customers.

4G LTE connectivity drains batteries faster, so I can’t vouch for the battery life with 4G LTE taking a toll. As it stands, the Photon Q 4G LTE will definitely last a full day of moderate use with the display on auto-brightness or set to a reasonable level, with email and Twitter syncing in the background.

Motorola lives up to my expectations of great call quality. When inside good Sprint coverage calls sound great. Callers are come through loud with a rich tone the iPhone can’t match. Callers report I sound good on the other end as well.

The Photon Q 4G LTE is a world phone, so it can travel to other countries and keep the calls and data coming for a fee.

Motorola nails audio as well, with loud clear tunes streaming out of the small speaker slot on the back of the Photon Q 4G LTE.

The Photon Q 4G LTE’s camera is by far the biggest surprise. Unlike past Motorola smartphones, the 8MP rear facing camera delivers impressive smartphone photos and is fast to react. 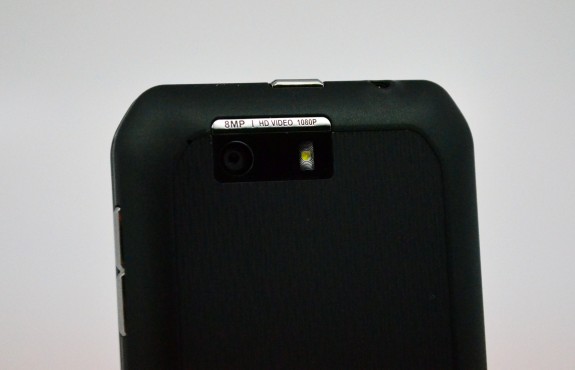 Whether launching the camera from the lockscreen or from the hardware shutter button the Photon Q is ready to take a picture or shoot video in a second or two. The shutter is fast, though thanks to autofocusing not as fast as the Galaxy S III or iPhone 4S.

Motorola includes the ability to take still photos while shooting HD video so I don’t have to choose between photo and video. The photos shot during this mode are 1920 x 1080 resolution. This is lower than photos taken outside of video, but still a nice touch. There is also a panoramic mode built in.

The sample photos below offer a look at the camera quality and a comparison to the iPhone 4S. 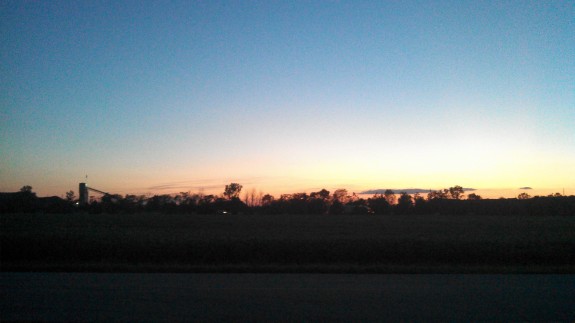 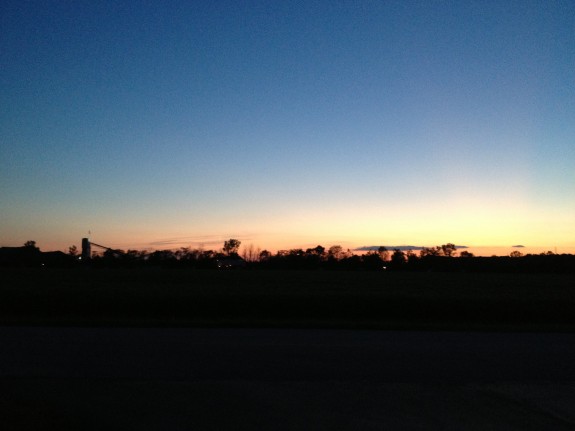 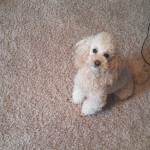 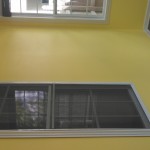 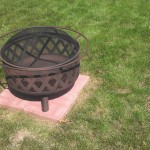 The main widget is the circles widget. This widget shows the time, weather and battery life, but with a flip of the circle it can show missed calls and other notifications and weather for another city. It’s a nice touch and looks nice. 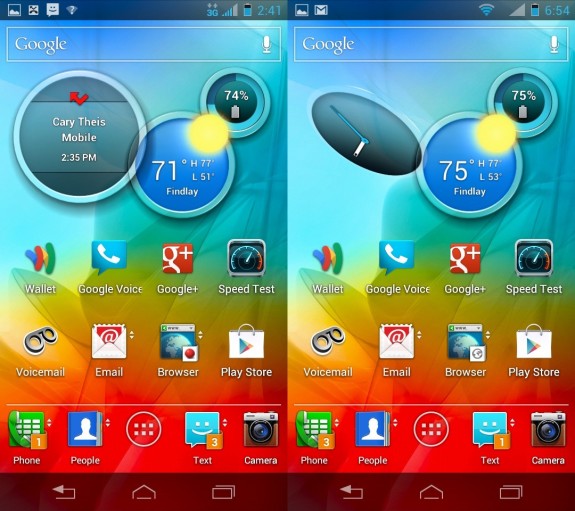 The icons for the built in browser, email app, phone, people and text messages include the ability to show more information. Instead of tapping, slide up to reveal recent texts and emails, bookmarks or favorite contacts.

The Photon Q 4G LTE also includes Smart Actions. This feature allows users to trigger functions at certain locations, times and when certain activities happen. This makes it easy to remember to plug in the phone, to reduce battery usage under select conditions, to silence the phone at night and more. This is the first Sprint phone with Smart Actions.

The video below highlights the Smart Actions app and capabilities.

Motorola offers an unlockable bootloader which means users can customize the Photon Q 4G LTE with custom roms. This is the first phone to work with the new bootloader unlocking program.

Is the Photon Q 4G LTE Worth It?

The Motorola Photon Q 4G LTE is an excellent phone, but the lack of Sprint 4G LTE coverage, and a smaller 3G footprint hold it back.

If Sprint’s 4G LTE network was larger the Photon Q would be an easy recommendation. For now, Sprint customers that know they have service, and are looking for a good phone with a great keyboard will be satisfied.

It’s tough to recommend the Photon Q 4G LTE to new customers, when Verizon’s Droid 4 offers a very similar phone with 4G LTE and the coverage this hardware deserves. 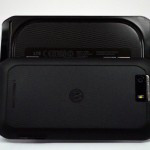 The back of the Photon Q 4G LTE is slick. 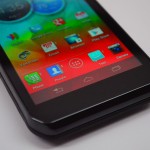 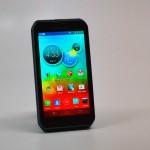 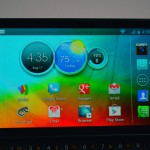 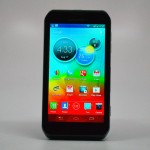 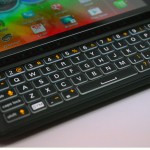 The Photon Q 4G LTE offers one of the best mobile typing experiences. 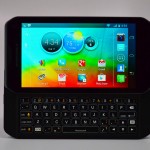 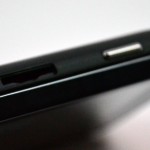 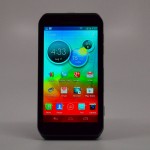 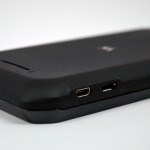 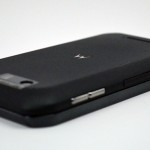 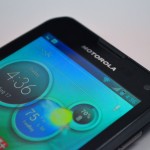