It looks like Motorola is going to be rolling out the Motorola Droid Bionic Ice Cream Sandwich update in September.

According to a Motorola rep, who seems to be fairly knowledgeable about the Droid Bionic ICS update’s status, Motorola is currently planning on rolling out the update at some point in September.

The Motorola representative says that the Droid Bionic update is currently at it’s Development phase, which is a step above the testing phase for the update. We assume the testing phase encompasses both in-house testing and the soak test that generally rolls out to select users prior to the update’s roll out. 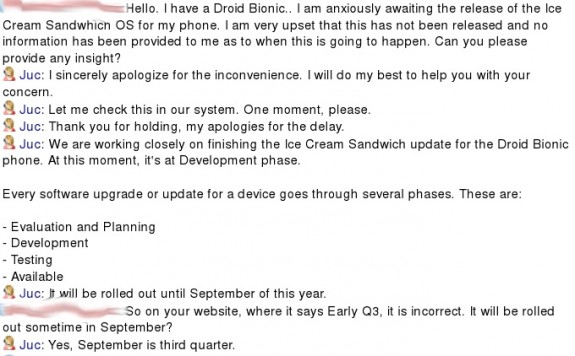 Motorola will likely roll out the Droid Bionic ICS update in September.

After the testing phase, the software will become available to all owners.

So, right now, it’s looking like September is the month that the Droid Bionic update will arrive. Motorola originally promised early Q3 for the update but now it looks like the update is just going to fit into the Q3 window. Q3 is comprised of July, August and September so it will be rolling out in the last month in the window.

Despite numerous leaks, the Droid Bionic ICS update is not yet official and to make matters worse, Motorola and Verizon have remained mum on a release date or its progress, even after the software missed “early Q3.”

Gotta Be Mobile also has heard that the Droid RAZR MAXX and Droid RAZR ICS bug fix updates are slated to roll out around Labor Day weekend which just so happens to be this weekend.

We aren’t sure which update, the Droid Bionic or the Droid RAZR’s, will roll out first but we have been told that they could possibly roll out around the same time.