Today is a big day for Motorola Droid RAZR and Droid RAZR MAXX owners as the Ice Cream Sandwich updates for both devices has begun to roll out. Owners of both devices who plan on upgrading to the new software will be happy to know that Motorola has released a video showing off the features that will be coming with both updates.

The video details the main features that will be coming along with the update. The entire changelog of features is more extensive so Motorola decided to highlight the main ones that the Ice Cream Sandwich update brings to the table.

First, the company touches on the new look and feel of Ice Cream Sandwich. The UI is a  big departure from Android 2.3 Gingerbread and it now includes, for one thing, virtual navigation buttons at the bottom that include a new Multitasking/Recent Apps.

Android 4.0 is also going to allow users to perform a variety of tasks, right from the lock screen. There are now easy shortcuts to make calls, texts and more, without having to unlock the phone. Droid RAZR and Droid RAZR MAXX users can now also take advantage of Face Unlock which allows for the phone to be unlocked using one’s face.

It features a much improved browser that is speedier and features tabbed pages and sync with Chrome for easy access to bookmarks. Ice Cream Sandwich also brings a new data monitor has been included so users can easily track data usage and voice input for typing. 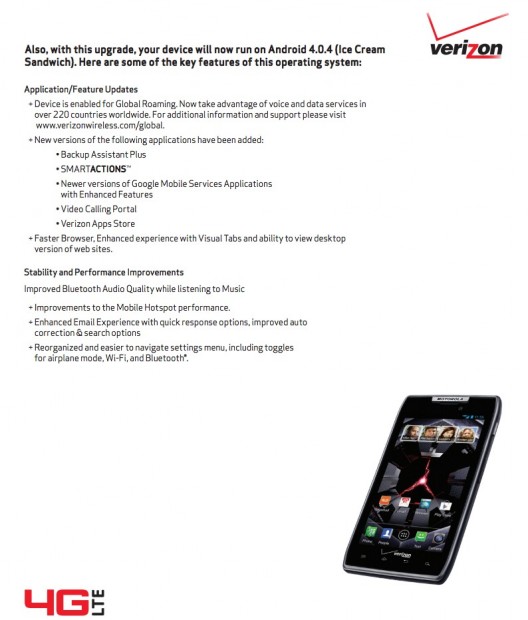 And because the Droid RAZR and Droid RAZR MAXX are Motorola phones, the update will bring improved SmartActions along with it as well.

Those, of course, are just the features that Motorola touched on. There are even more features, enhancements and bug fixes awaiting owners so those who own either the Droid RAZR and Droid RAZR MAXX will want to check their devices to see if the software has arrived.