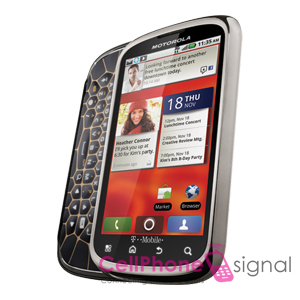 New images of the successor to the Motorola CLIQ for T-Mobile USA have surfaced, and Cell Phone Signal is postulating that Motorola may make an announcement for the Android slider at the Consumer Electronics Show in January. The device will feature an interesting keyboard arrangement with keys that are shaped like honeycomb, though it is unclear if the device will launch with Android 3.0 Honeycomb or another edition, like Android 2.2 Froyo or Android 2.3 Gingerbread.

The CLIQ 2 will feature a 5-megapixel camera with LED flash, Bluetooth, WiFi b/g/n, GPS, and the MOTO BLUR user interface with new widgets.

Since T-Mobile is now expanding its network to include more 4G HSPA+ devices, the CLIQ 2 can be an HSPA+ 4G device and will be the first for Motorola on the network.

The launch of the original Motorola CLIQ had marked Motorola’s come back and is the turn-around device for the company after declining sales post-RAZR era. Since then, Motorola has been focusing on the Android platform and had launched a number of notable devices on all four major carriers in the U.S. though its relationship with Verizon with the Droid brand is probably the strongest and most recognized brand.