However, there is a catch. If your Motorola-made Android device is sold and subsidized through a carrier, the unlocked bootloader situation would need to garner carrier approval before Motorola will ship a device with the bootloader available and accessible to users. 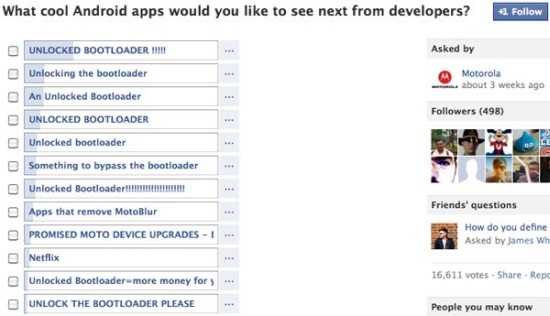 In a statement to AusDroid, the company says:

We completely understand the operator requirement for security to the end user, and as well, want to support the developer communities desire to use these products as a development platform. It is our intention to enable the unlockable/relockable bootloader currently found on Motorola XOOM across our portfolio of devices starting in late 2011, where carriers and operators will allow it.

A bootloader is essentially a code that runs before any software or OS begins to run on a device upon booting the device and checks the hardware, such as the processor and motherboard before allowing the OS to initiate. Manufacturers usually lock the bootloader on a smartphone to prevent unauthorized tampering with the OS, software, or manufacturer-made customizations for the phone. It’s also a security measure to ensure that users enjoy the experience of the phone that either the OEM or the carrier had intended for.