In a welcomed 180-degree change from its policy, Motorola has gone on record to now say that the company will perform the 4G LTE radio swap, which is a hardware upgrade, to upgrade the Motorola Xoom Android 3.0 Honeycomb tablet to support Verizon Wireless’s faster 4G mobile broadband network. The Xoom-maker had previously said that users who rooted their Xoom, a process equivalent to jailbreaking on iOS devices, will not be eligible for the upgrade service. 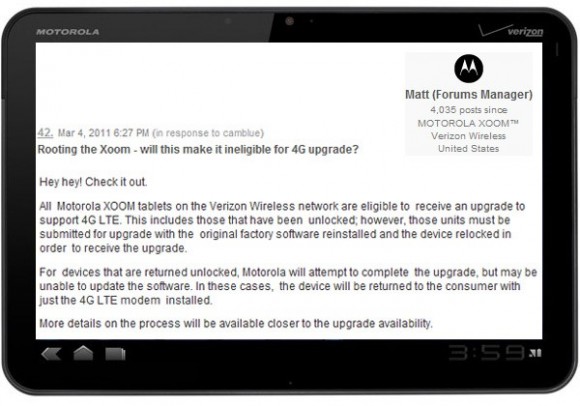 Motorola advises owners who have rooted their Xooms to revert their firmware back to the original firmware that shipped on the devices. While Motorola will be performing the hardware upgrade, a software patch will still need to be applied to ensure that the 4G radio will work with Android 3.0. The company says that with rooted devices, the patch may not work and the tablet will be returned to users only with the hardware upgrade sans any software upgrades.

Motorola says that additional details will be made available closer to when the 4G upgrade will be available.