With 2013 next-generation smartphones on the way, most of the attention has been focused on the upcoming Samsung Galaxy S4 and the rumored HTC M7, the two next-generation smartphones from two of the biggest Android manufacturers in the world. One company that has been out of the daily spotlight is another major name, Motorola, though that doesn’t mean that it isn’t working on anything. In fact, it’s apparently working on something big, something that is currently being called the Motorola X Phone.

In mid-2012, Google bought Motorola Mobility, one of the leading manufacturers of its Android smartphones. And it wasn’t until the fall that we saw Motorola start shifting gears.  In late 2012, we saw the company’s new management, selected by Google, attempt to repair its image which had been in disrepair due to slow Android updates for its devices. And we also likely saw the last smartphones from the Sanjay Jha era at Motorola in the Droid RAZR HD, Droid RAZR MAXX HD and the Droid RAZR M. Point being, it appears that the old Motorola is gone and it appears to be carving a new future.

Many of the details of pertaining to that future remain unclear, though, we’ve seen flashes.

The first is Google’s confirmation that it had 12 to 18 months of a product pipeline to work through before the company could sit down and produce something of its own. Again, the last of that pipeline should be those RAZR-branded smartphones. And now that they are getting a handle on that, they can turn their attention to getting a Motorola device out onto shelves. And that’s where the second flash has emerged.

While most of the attention has been given to the products of Motorola’s rivals, specifically the Galaxy S4 and HTC M7, rumors of Motorola’s next project have surfaced in the past few weeks. The project, as of right now, is called the Motorola X Phone and if the rumors are true, the device has a chance to potentially be one of the biggest hits of the year.

Here, we want to take a look at everything we’ve heard mentioned so far about this X Phone, a device that could be Motorola’s first, and maybe only, high-end smartphone of 2013.

The first rumors of this ‘X Phone’ came courtesy of The Wall Street Journal who claimed that Motorola and Google were collaborating on a high-end smartphone, potentially coming out this year. Evidently, the companies have experienced a myriad of issues with the technology that they wanted to bring forth on the device, though it appears that they are trying to get it out this year to compete with the Galaxy S4 and likely, the iPhone 5S.

The report mentioned no specific release date or time frame, only saying that the companies were working to get it out in 2013. Fortunately, a rumor from an anonymous source who has been solid with Motorola information in the past suggests that the phone could be out sometime in the middle of 2013.

The X Phone may arrive at Google I/O in May.

According to a vanished forum post, found by Droid-Life, the Motorola X Phone could launch at Google I/O in May. Google typically uses Google I/O to announce a new version of Android software, but in the past, it has also announced new hardware with the Nexus 7 being a prime example. And given the Nexus 4’s lack of 4G LTE and  the supply issues it has faced since launch, a new phone at Google I/O certainly is a possibility. What better place to show off the new Motorola?

Right now, according to this rumor, it appears that Google and Motorola are targeting a release on July 8th, right smack in the middle of summer and right around the time the Galaxy S4 should be in full swing.

A six month wait for a new Motorola smartphone would be quite the wait, but if Google and Motorola are cooking up something big, as is rumored, it will likely be well worth the wait.

No details about the X Phone’s form factor have emerged but we did hear Google CEO Larry Page drop some potential hints during Google’s earning call. Here is what he had to say.

I am excited about the business. In today’s multi screen world, the opportunities are endless. Think about your device. Battery life is a huge issue.  You shouldn’t have to worry about constantly recharging your phone. When you drop your phone, it shouldn’t go splat. Everything should be a ton faster and easier. There’s real potential to invent new and better experiences.

So while he didn’t specifically mention the X Phone, it’s clear that Page wants two things from a phone. Great battery life, something Motorola has offered in phones like the Droid RAZR MAXX HD and durability, another hallmark of Motorola devices.

Again, the original X Phone report claimed that Motorola and Google were exploring different materials, likely in an effort to make the phone durable. 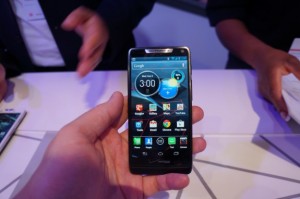 The X Phone could feature an Edge-to-Edge display.

One of the biggest features coming with 2013 smartphones are their next-generation displays. The HTC M7 is rumored to have a 4.7-inch full HD 1080p display with 468 pixels-per-inch. The Galaxy S4 is rumored to have a larger screen with similar technology. If true, both would have two of the best looking displays on any smartphone, ever.

Google and Motorola are rumored to be including the very familiar 5-inch display on the X Phone. The screen is rumored to be Edge-to-Edge like the Droid RAZR M’s and we imagine that it would likely offer resolution consistent with the competition.

If true, as we have pointed out, it would be significant because it would allow the X Phone to retain a large display area but without the surrounding bezel area which could make the phone extremely compact.

One of the features that has been lacking in Motorola smartphones is the camera. The cameras in previous Droid phones have been solid but not great. It could be that Google decides to put a fantastic camera in the X Phone though. The original report claimed that the companies “wanted top-notch features for the phone’s camera and photo software, such as better color saturation and the ability to take panoramic shots” but it appears that they were too much strain on the battery.

Maybe they will find some sort of compromise in the end.

Ever since the release of HTC’s Nexus One, consumers have been chomping at the bit for a Motorola Nexus smartphone. There have been rumors of a Motorola Droid Nexus but they have never materialized. The X Phone could change that. Sort of.

Rumors state that the X Phone will indeed have a vanilla version of Android, which means it won’t have MotoBlur, but it apparently will have bloatware on board. Nexus devices don’t come with any bloatware which is why we say “sort of.”

It looks like that bloatware can be removed once the phone is unlocked and even those who don’t unlock should be able to find a way to get rid of it.

Rumors from Droid Forums state that the phone will be running Android 5.0 Key Lime Pie, if Google indeed introduces it at Google I/O. Details regarding Google’s rumored operating system are scarce at this point though.

According to the same rumor, the Motorola X Phone will be sold for $299 on-contract through Verizon. That’s the same price that the carrier charges for the Galaxy Note 2, a device with a 5.5-inch display and bundled S-Pen stylus.

No other pricing is known, though if the X Phone does arrive on all carriers, we imagine that Verizon’s price tag will likely be par for the course. What’s more is that it appears that Verizon may charge a $15 per month fee for an unlocked bootloader.

Verizon is notorious for keeping its bootloaders locked down and its devices are typically impossible or extremely difficult to unlock. Without an unlocked bootloader, users can install custom ROMs, something that is important to many Android enthusiasts.