The Motorola X Phone, rumored to be Motorola’s flagship smartphone of 2013, has seen more rumors pop up, suggesting that the device could have a Droid RAZR MAXX HD sized battery, a durable high-quality design and a fantastic camera, the latter feature being something that Motorola isn’t known for.

The X Phone, a device that apparently is a collaboration between Google and Motorola, has been one of the more mysterious flagships to leak out over the past few weeks. While the HTC M7 and the Samsung Galaxy S4 have been revealing themselves on an almost daily basis, the X Phone has remained out of the spotlight. 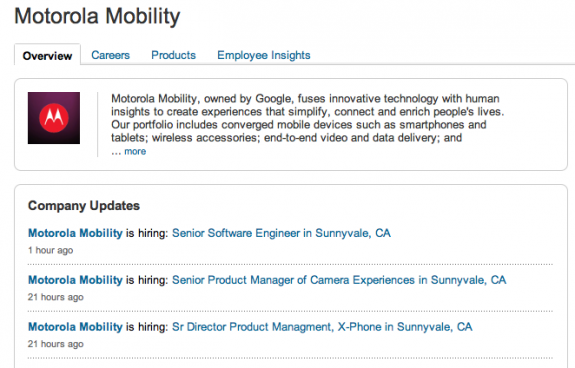 The Motorola X Phone could arrive as soon as May 15th.

That is, until last week, when interest perked up after Motorola was caught looking for a Product Manager for the X Phone. And now, we have a glimpse at some more possible features of Motorola’s rumored 2013 flagship.

PhoneArena has suggested that an early prototype of an X Phone is currently in the hands of at least one tester and that the device is apparently going to mirror what Larry Page suggested on Google’s earnings call when he suggested that phones need to be durable and feature great battery life.

Evidently, the X Phone will sport a Kevlar chassis, a hallmark of Motorola’s devices and it will also apparently sport a Droid RAZR MAXX sized battery which could mean that it’s 3,300 mAh and allows for up to 21 hours of continuous talk time. That battery life has made the Droid RAZR MAXX HD one of the more attractive Android phones on the market.

The display is supposedly around 4.8-inches, with 5-inches being mentioned in the past, and it apparently has a quad-core processor – up from the Droid RAZR HD’s dual-core processor, and a microSD card slot for expanded storage space.

There is also word that it may go up to 128GB in storage, something that we have yet to see from a mainstream smartphone.

As for a camera, it’s rumored to have a sensor from Sony which could mean a much improved camera from the Droid RAZR HD which did nothing to win consumers over. Motorola phones have often been lacking in this department so a big change here would be welcomed.

The prototype is said to be running stock Android, something that has been rumored previously, and again there are claims that the phone could arrive as soon as May 15th at Google I/O.

It’s unclear if the device will be featured as a Nexus smartphone, previous rumors suggest that it will be sold both through Verizon and the Google Play Store, but it’s looking like it could be the first big collaboration between Google and Motorola Mobility, a company that it bought last year.