Google usually announces new Nexus hardware in collaboration with its hardware partners at its annual Google I/O developer conference every year, and this year, Google-owned Motorola is expected to debut its X Phone at the same conference according to the latest leaks. Motorola’s X Phone, unlike the unlocked Nexus, will be carrier-targeted, so hopefully Motorola can get cross-carrier support for its X Phone brand beyond the successful Droid collaboration with U.S. partner Verizon Wireless. This means that an X Phone can potentially land on AT&T Mobility, T-Mobile USA, Sprint Nextel, and Verizon Wireless simultaneously with high-end, lust-worthy specs that rival flagships from HTC, LG, and Samsung in the Android space. 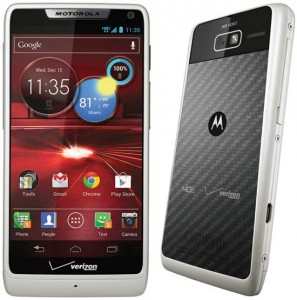 As shown, the Motorola Droid RAZR M for Verizon with edge-to-edge display

According to those same leaks on Droid Forums, the X Phone will have a near-bezel-less edge-to-edge display similar to what Motorola had done on the Motorola Droid RAZR M. The display is said to be of the 5-inch variety. Though no exact specs on the screen were mentioned, given its launch at Google I/O in May 2013 and the 5-inch spec, we’re guessing this will be a near bezel-less 1080p HD display. This will be significant as it will allow the X Phone to retain a large display area, but without the surrounding bezel area, the phone can be a lot more compact than competing 5-inch models on the market today.

It’s unclear what other specs the X Phone will debut with, and the timely launch coinciding with Google I/O may mean that the device will debut with the next version of the Android OS called Android 5.0 Key Lime Pie.

Other high-end specs for 2013 that could be included in the X Phone would include either quad-core processing or octa-core CPUs, ample 2 GB RAM, and slim and trim designs. If the X Phone gets quad-core processing, this will be a first for a Motorola phone as even the late release of the Droid RAZR HD and Droid RAZR Maxx HD series came with a dual-core Snapdragon processor at a time when quad-core is beginning to gain momentum. Corning also introduced Gorilla Glass 3 earlier this month so that could be another feature consumers are looking for as well for some durability for the glass panel.

Other Devices Launching at Google I/O

In addition to the X Phone for an I/O launch, there are also a number of other devices that are rumored for this time period, including two Nexus product launches by LG. LG is rumored to deliver the Nexus 5 smartphone for Google after what may be seen as a successful Nexus 4 collaboration, as well as a Nexus 7.7 tablet.

The Competitive Smartphone Arena for 2013

It’s unclear if an X Phone debut may mark the end of Motorola’s sub-brands like Droid for Verizon or Atrix for AT&T in the U.S. The X Phone will likely have to compete against the HTC M7, the Samsung Galaxy S4, and the LG Optimus G2, all rumored for debut sometime this year and some of those models can come as early as Mobile World Congress next month.