Google has already rolled out the Motorola Xoom Android 4.1 Jelly Bean update for the Wi-Fi only Motorola Xoom and it looks like the 4G LTE version of Verizon is poised to get its upgrade to Jelly Bean as well.

Over at XDA-Developers forums, a user named compnird says that his 4G LTE Motorola Xoom on Verizon is running the final Android 4.1 Jelly Bean build for the Verizon Xoom.

He claims that Verizon has signed off on it so it could be rolling out in the not-so-distant future. Of course, this is a Verizon device, the carrier is notoriously slow to update its devices, so owners shouldn’t be holding their breath. 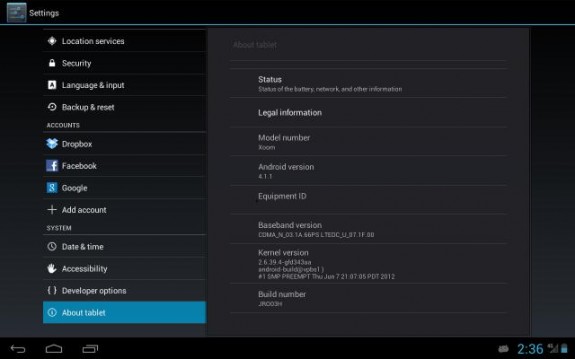 Fortunately, he has leaked the update for those with a 4G LTE Xoom (and 3G Xoom apparently) to enjoy.

However, it appears that his claims could be spot on as Droid-Life is reporting that a lucky Xoom 4G LTE owner received the Android 4.1 Jelly Bean update over the weekend. It’s the same build that was not only mentioned, but leaked over at XDA.

It’s unclear just how this Xoom received the update. Motorola and Verizon have not said whether it was an accident though it looks like it might have been.

Neither company has said when 4G LTE Xoom owners should expect Android 4.1 Jelly Bean and given that the Android 4.0 Ice Cream Sandwich update rolled out in June, we did not expect anything to surface this soon. Yet, it looks like Motorola and Verizon may be poised to roll this update out in the near future.

The evidence certainly suggests that but until we get an official announcement, owners shouldn’t expect anything.

It’s our hope that it does roll out soon as that would bode well for a swift Android 4.1 Jelly Bean update for Verizon’s other major device, the Samsung Galaxy Nexus.

Per usual, we’ll keep an eye out.